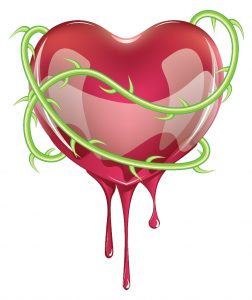 Forgiveness Vs. Cord-Cutting. Tormenting yourself, like giving yourself an extra-bleeding heart? Is that really required to forgive?

Forgiveness Vs. Cord-Cutting. Could be, sometimes you’ll never be able to forgive until you cut a particular cord of attachment. To the one who wronged you!

I’ll warn you, Blog-Buddies. This will be one of my more controversial posts. If you don’t hate it, you may love it. In which case, please share it with friends who might find it helpful, too.

What prompted this article?

“How to Help Others Forgive?” is the topic of a recent advice column by Amy Dickinson. She’s at the top of her field, at the top of her game. So I couldn’t wait to read how the author of “Ask Amy” would answer a reader’s question from stepfather Tom about his stepdaughter. (Whom I’ll call “Gladys.”)

Gladys already sees a psychotherapist. Yet she is unable to forgive her birth father, and Stepdad Tom wanted to help.  Would Amy recommend a book on forgiveness?

Amy Dickinson began her response, “There are many, many books about forgiveness, and every one I have ever read says: Forgiveness is a choice. Forgiveness is a gift you give to yourself. Forgiveness equates with freedom from the shackles of anger and resentment.”

Then she goes on to recommend “Dare to Forgive: The Power of Letting Go and Moving On,” by Edward M. Hallowell.

A thousand years ago, even a hundred years ago, this advice would have been fine. Okay, it would also count as anachronistic advice, since 1,000 years ago you couldn’t recommend Hallowell’s book (published in 2006).

To be clear, I think Amy Dickinson gives topnotch advice for mainstream American thinking today. I just wish she knew about…

Better advice for The Age of Awakening

In 2007, a very different book on forgiveness was published. It was called:

Heal the STUFF and forgiveness won’t be an issue any longer.

Ok, that would have been a pretty long title. The actual how-to book, by Rose Rosetree of all people, is called, “Cut Cords of Attachment: Heal Yourself and Others with Energy Spirituality.”

So many forgiveness practices, so little time!

What kind of person rails agains that? Well, me. Hey, at least I stop short of dissing motherhood and apple pie. There are limits. 😉

Of course reading the human energy field in depth and detail is the emerging literacy for this new millennium. Just as the second millennium saw the rise of near-universal Gutenberg-style literacy, this new time is seeing a rapid rise in people who learn how to read auras in such detail they can go all the way to the level of chakra databanks… as in our Aura Reading Film Review of Michelle Williams playing Marilyn Monroe.

Reading auras in this third millennium doesn’t have to mean psychic development. No, it can be learned as a form of literacy, pure and simple. Just as Gutenberg-style literacy could be learned for the last bunch o’ centuries without your having to apprentice at a monastery.

Why Forgiveness Vs. Cord-Cutting?

And Why Might Cutting a Cord of Attachment Bring You Much Better Results?

Let’s give this discussion a human context, the Gladys context. In our anecdote about the loving but frustrated Stepfather Joe, the cord of attachment in question began when Gladys first became interested in her biological father — let’s call him “Joe.” Two energy structures developed, starting from Gladys, connecting the two of them.

Using surface perception only, there is no way to know about either energetic structure. However that doesn’t keep them from impacting how Gladys thinks, feels, remembers, forgets. No amount of forgiveness practice will touch a cord of attachment. So let’s consider further.

Contents in Gladys’ cord of attachment can change over time but will only move in the direction of bad to worse.

And what do you find if, like me, you have spent over 10,000 hours in the field of Energetic Literacy, healing, and teaching about deeper perception?

Whatever happens to get stuck in a cord of attachment will recycle 24/7 in your subconscious mind. There is, literally, a sequence of “cord items,” part of a “cord dialogue” that moves through your aura. When you think about the cordee (the person at the other end of your cord of attachment), the whole sequence will run through you extra times.

Therefore, ironically enough, every minute that Gladys has spent with her therapist, trying to work through issues about her father Joe, guess what? She has triggered extra subconscious run-throughs of all the old distress.

Forgiveness Vs. Cord-Cutting. To Be Blunt.

Resolving issues emotionally for forgiveness… does not remove a cord of attachment.

Praying and receiving answers to prayers for forgiveness… will not remove a cord of attachment.

Cord-cutting, done effectively, means that you will never again have that cord of attachment. You can, of course, learn more about this from several of the most popular posts at this blog — not a bad way to start.

Many of you Blog-Buddies have also had telephone sessions with me where I have facilitated aura healing with this method. Glad to say, some of you Blog-Buddies these days are even in my Energy Spirituality Mentoring Program, because we are moving as quickly as we can to train professionals in this emerging field.

Please note, I do not mean to imply that cutting cords of attachment is the only way to remove STUFF in the way of forgiveness. Instead I am making the point that moving out STUFF works far better than staying on the surface of life and dealing with all of the subconscious and astral programming.

I happen to discuss cord cutting because it is one of many skills of RES Energy Healing that works! Including for clients who have struggled to forgive.

Before our session, they couldn’t.  Now they can. That’s what can happen with Cord-Cutting, Vs. Outdated Age of Faith practices. Like so-well-meaning forgiveness!