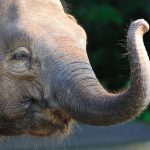 The strength of an emphant, only human, so let’s compare the auras of Meryl Davis and Charlie White

Meryl Davis and Charlie White, just how entwined are their auras? Energetic literacy can tell us.

When we see a couple ice dancing with such precision, closeness, tenderness and trust…

Hearing the romantic, stirring music for the ice dance…

It’s so easy to think they must be in love.

Aura readers, let’s explore the dynamics between ice dance champions Charlie White and Meryl Davis. Previous articles in this series revealed the focused ambition of Meryl Davis  and the joyful self-confidence of Charlie White. Now energetic literacy research can explore  what happens with them together, depending upon each other in a very dangerous, demanding sport.

For today’s aura research, I used one of those amazing photos taken from the Davis and White team, Olympics 2014, where Charlie lifts Meryl as though she were as light as a smart phone, while she has instantly hurtled into a position of improbably creativity. It’s worth scrolling to the end of today’s article just to click on that link.

There you’ll also find technical information about aura reading research and links to resources for doing a celebrity aura reading.

A technical point about chakra databanks being researched today

If you work with GLADYS, you will have many chakra databanks related to her. And vice versa.

If you are partnered with JOE, you will have many chakra databanks related to him. And vice versa.

For today’s celebrity aura reading, I will select chakra databanks of that kind. Some of the 50 chakra databanks in a major chakra that are situational, conditional, related to a person’s lifestyle.

It’s the first time ever at this blog for an assortment of chakra databanks that are exclusively of the optional variety.

You fellow consciousness nerds may share in my glee!

Related to my earlier aura reading of Meryl Davis, she doesn’t habitually relate to her body with much affection or, even interest. Rather, usually her body is a contraption for doing things, and she cares for it diligently.

Now it becomes evident that care of the body, and learning technical skills, are more like preparing a sacred offering to the Divine. Like preparing the ghee for a yagya or pouring wine into a chalice in preparation to offer communion.

Thus, Meryl Davis’ sense of self — in this aura reading chakra databank — at the time of this photo — is neither about her human identity nor about performing with Charlie White but, rather, an ecstatic Divine offering.

Well, Blog-Buddies, there is an interesting start!

29 feet. It takes effort and practice, but Charlie White temporarily puts on hold his usual expanded sense of self, that peacock in full glory mode that I encountered when researching him in the previous celebrity aura reading.

Charlie White must focus really hard on the technical requirements for his job. Where awareness of Meryl Davis has nothing to do with what’s going on, other than mechanically lifting her properly while keeping balance.

It takes a lot to get Charlie White to concentrate and focus on something. His sense of self can be so playful, and also so defined or distracted by the social response he gets from others.

Just think about how, at age five, he started learning to skate so that he could go out on the ice with the older children. Meryl Davis? I doubt that she has made few choices in life — skating-related or otherwise — where she was motivated to hang out with the gang.

1/8 inch. There is zero interest in Charlie or awareness of him, except that chakra databanks don’t turn into nothing. Long as a person lives, there will always be 1/8 inch at a minimum. Reminds me of what is said about the weight of a dead body compared to someone while still living. How many ounces lighter? That’s the part containing those chakra databanks.

As a teensy detail, Meryl Davis feels 100% confidence in being held aloft by Charlie White. That helps her to have zero concern about him as she stays present in the room, energetically.

As for her own sense of self, that 1/8 inch to the “Root Chakra Databank for Presence in the Room while with Charlie White? The human presence has served as a launchpad to move her into Fairyland.

27 feet. Charlie White may be a ham. (See the previous reading of his aura, including his “Root Chakra Databank for Presence in the Room.”

However, Charlie has learned he cannot turn on charisma, or otherwise distract himself, and still do this job of heavy lifting. So this chakra databank has very human concentration and unbroken physical focus.

Nothing supportive is happening to assist her. This is not unskilled empath ice dancing.

25 feet. Solidly functional. Energy flows smoothly through her body, and this is an enhanced version of what flows through her usually. (See the related chakra databank being read in Aura Reading Gold Medalists Meryl Davis and Charlie White, Part One).

Meryl Davis benefits from Charlie White’s male energy and steady, dependable physical support. Her energy does flow differently while they are skating together.

This steadiness allows her to stay present enough, while in an ecstatic state, to do the physical moves required for the precision required for this athletic pursuit.

14 feet. It is a struggle not to get tired and overwhelmed. Or sloppy. Wow, does it take a lot of strength to execute a lift like this one in the midst of such a demanding routine! No matter how hard he has trained, Charlie White pushes against his own limits even now. It’s like the weightlifter you see at the gym, diligently bench pressing, grunting. from the exertion.

Blog-Buddies, until I read this chakra databank I had no idea that it was quite this physically hard.

What else is intriguing about research of this chakra databank? Charlie White’s “Belly Chakra Databank for Flow of Energy while with Meryl Davis,+ — well, hello! Once again, has just as strong a disconnect between partners as hers has towards him. They are using each other in a very pure, compatible way.

1/8 inch. No need to give to Charlie emotionally. He has more than enough self-love without anything from Meryl Davis.

Within this chakra databank, I find a bit of ambivalence about him as a person, a mixture of trusting, love, annoyance, irritation, and even a bit of dislike — all quite crammed into denial. Emotional giving — emotional anything — would be a distraction for Meryl Davis while she skates with her partner.

1/8 inch. A total blank, due to attention directed elsewhere. A very comfortable kind of total blank, emotionally, for this guy.

1 inch. A very vague, ho-hum, connection is all that Meryl Davis shares with her partner spiritually.

Likewise her Third Eye Chakra Databank for Connection to Spiritual Source has nothing to do with theology or sanctification or spiritually self-conscious anything.

[Note: I have done a slight rewrite of these two previous paragraphs, inspired by astute comments below by SYLVIA.]

2 inches. The woman is an object, an object to be lifted and moved.

Spiritually, there is no upliftment.

Although a quick peek showed something rather different at Charlie White’s Third Eye Chakra Databank for Connection to Spiritual Source. This chakra databank is lovely and far bigger and more interesting than how it displayed in Part Two of this series of celebrity aura readings.

It is 50 feet of a very human, sincere, honest, kind of opening up  spiritually. As if all his usual defenses and distractions are down, compared to how Charlie White normally functions in this incarnation (at the time of this photograph).

Conclusion after twice reading the aura of Meryl Davis

Meryl Davis is engaged in a powerfully spiritual act as she performs with Charlie White. Nothing about it relates to romance, or even human affection. Charlie White serves her as a dependable partner, helpful but having relatively energetic impact beyond the security she brings.

It’s also fascinating to me how this aura reading research has revealed an extremely powerful, ecstatic experience of spiritual surrender and transformation. Yet there is nothing Third Eye-ish. This is not worship. This is not technique for meditation or spiritual evolution. It is more a form of talent and grace, purity given to her for this lifetime.

And it sure does explain how Meryl Davis could work so steadfastly for 17 years, keeping her focus, eating so little, allowing no distractions. Really, compared to her bliss while ice dancing and showering down Divine presence into earth, winning that Olympic Gold medal is like being handed a trinket, the prize in a box of Cracker Jacks.

While not dancing, that’s different. Back to her human and ambitious self, winning matters very much indeed. (As shown in the earlier aura reading of Meryl Davis, just as herself.)

Conclusion after twice reading the aura of Charlie White

Children of a certain age engage in parallel play. Charlie White engages with his ice skating partner in a comparable way.

Seems to me, he is growing so beautifully on his path of personal development. Ice dancing is both technique for spiritual upliftment and validation of his human identity.

This is a very physically-based lifetime (again, as it seems to me). What if you were to ask Charlie White, “Are you more than your physical body?” I would expect a quizzical look in return, or perhaps a light-hearted “Duh!”

Whereas his partner that Meryl Davis, fresh from a celestial jaunt, ecstatic it that way she probably only becomes during ice dancing? I wonder if she has ever even bothered to tell him.

It’s not as though she needs validation for what is.

Do aura reading along with me, once you have developed energetic literacy

That simple, since there are hundreds of chakra databanks to choose from. (Read People Deeper does contain the most comprehensive list of any of my books so far on energetic literacy.)

How can you read auras along with me? Copy and expand the aura photo captured from the performance that clinched the Gold Medal for  Davis and White. (Of course, every photo is an aura photo, once you have developed skills of energetic literacy.)

When researching Meryl Davis, take your copy of this photograph and flip  it 90 degrees to the right. You’re still reading her energy field sideways, but that’s way less mind-scrambling than doing aura reading of somebody who is upside down.

For todays aura reading, I will use an advanced version of the technique for Plug in by Touch in Read People Deeper.

Interested in background on how to read auras? The screen link just provided is one resource. Here is a YouTube introduction to my system of Aura Reading Through All Your Senses.

Read here about the symbolic measurements I use for reading chakra databanks, from the background material used in a book about making money, not ice dancing.If youre at all curious, take a look at this article where I explain the meaning of sizes in chakra databanks (Nadis). This is part of  the Online Supplement to Magnetize Money with Energetic Literacy, at my website. Loads of free information awaits you.

Aura Reading Gold Medalists Charlie White and Meryl Davis, Part Two
How you can change the media conversation about marijuana