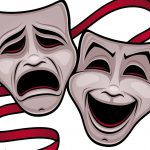 How I loved watching Audra McDonald cry! There it was, the Tony Awards broadcast from last weekend, which was recorded at my house for chunks of happy viewing. Last night I saw McDonald win her sixth Tony, becoming the first performer ever to win six Tonys in competitive categories.

For years I have loved this glorious singer and charismatic performer. While viewing Audra McDonald’s reaction to her big win, I watched as the skilled empath I have become over the years. I watched and listened during the speech; I observed her later in the broadcast, tear-free — all the emotional flow reminding me of weather changes in Hawaii.

Also I noticed how Audra McDonald’s beaming daughter, watching from the live audience, seemed not-in-the-least surprised or worried by her mother’s show of tears during the acceptance speech — a clue, perhaps, to Mom’s temperament at home — not being, shall we say, grounded in a totally unalloyed equanimity.

A noteworthy acceptance speech from this historic winner

In the history of Tony Awards, nobody else has won such acclaim.

What touched me most in Audra McDonald’s acceptance speech? Her thanking Lena Horne, Maya Angelou and Billie Holiday. Holiday didn’t receive nearly her due, Audra McDonald said. True and poignant, for sure.

Is life fair? To this practitioner of Soul Energy Awakening Hypnosis®, life on earth is much more fair than we realize. From one lifetime to another, complicated by everyone else’s intersecting karma plus the mighty power of contemporary free will… eventually our good karma always does reach us.

What some call “irony,” this past-life regression facilitator calls “The mixed beauty, mystery, and ineffable majesty of life at Earth School.”

That said, that contrast would be a shock for actress McDonald, identifying with Billie Holiday’s tragic life, performing in Lady Day at Emersons Bar & Grill , “Lanie Robertsons elegiac lament for the jazz singer Billie Holiday at the end of her broken-down life.”

What an almost unbearable contrast, to play that trailblazing, struggling African-American performer night after night… and then personally receive the biggest acknowledgement of any performer in the history of American theater.

I couldn’t post this picture on today’s article itself because it isn’t in the public domain (like the photo I did use at the top). To fully enjoy today’s sharing of a depth-aura research experience:

It’s a rare adult who can cry that hard, and deep, ever.

Or to build to that depth of emotional release in such a small number of seconds.

But evidently Audra McDonald has learned to feel and express the full range of crying, just as she has learned to sing the full range of her natural singing voice. And wow! Was that deep crying sure captured in that photograph. Researching her at such a time, what a treat to read the aura of someone I admire, exploring her who-you-be from the inside, with consciousness.

I’ll be using a technique from The Master Empath, “Even More Amazing Access to your Consciousness Elevator.”

90 miles. Fully identified with the collective consciousness, and struggles, of African-American women who have been performers. As though Audra McDonald is being energetically hit with the full impact of struggle from unrecognized, unappreciated, singers and actresses who have worked every bit as hard as she has.

And this woman may not show effort in her work. She may show just ease and graciousness. But, wow, does Audra McDonald ever know the meaning of words like “Hard work,” “Discipline,” “Forbearance,” and “Persistence.”

80 miles. One important aspect of Audra McDonald’s sensibility as a person (and a performer) is how she plugs into present time and place, very humanly, improvising every second and right in the moment.

She does this especially strongly when in The Zone as a performer.

Out of habit, more than anything, this is occurring now. The experience feels overwhelming, as though collective consciousness is an ocean where she is body surfing. In the moment when, historically, she receives this coveted award and breaks a record for ALL theatrical performers in American history, that moment in history lifts her up.

So often, watching awards shows for performers, I will do a Skilled Empath Merge or aura reading during an acceptance speech. It is pure human ego, glorified and stroked and celebrated. Fascinating as such!

It is rare to see someone accept a Tony or Oscar or Emmy or Grammy with a sense of history NOT about personal ego, but with that personal ego irrelevant for that moment.

What a luscious treat to research this chakra databank in so-evolved Audra McDonald!

90 miles. Chills, and an uncanny experience of receiving appreciation on behalf of her group, that history of African-American performers including Billie Holiday.

18 feet. Shutting down due to overwhelm. Yet there is a very characteristic subconscious commitment to later re-examine what she has felt and learn from it. Good or bad, sweet or bitter.

This is a very Audra McDonald thing to do, typical of her courage and also a form of commitment to her craft.

Personally I find it fascinating. I have a pretty intense inner life and emotional repertoire, yet I have never once made such a commitment in my life. This is an actor thing, surely!

20 feet. Golden presence of God is lighting up Audra McDonald. Her identity and work and struggles and history are all being acknowledged in this moment. Although she is inwardly choosing to focus more on the historic moment and representing the group of performers with which she feels identified, in the background is something else.

It is pretty hard to imagine a greater acknowledgement, in dramatic fashion, in one small human increment of time and space, being so deeply validated, so honored.

She feels a kind of joy so intense that it nearly breaks her heart.

Out to the moon. Cool and steady. This is a breakthrough experience of spiritual connection, steadying Audra McDonald as she gets through the moment and does her performance called “Acceptance Speech in Front of the Cameras.”

Later this will be integrated and built upon as a treasure in the long history of her soul, the start of a leap in Audra McDonald’s spiritual expansion.

Now it is not self-aware, just a beautiful big tether that helps her to manage in the moment.