When a mega-famous, talented man like Robin Williams makes his transition…

Wait, that’s not quite the right way to begin today’s aura reading. Like Robin Williams? The man was such an original.

In retrospect, I related more to that Mork character than I did to anyone else on TV. Probably I related to him better than to most people I knew.

Today’s experiment in energetic literacy is dedicated to all you Blog-Buddies who, likewise, haven’t had an easy time fitting in. You already know this entire blog is for you. Well, in particular, this tribute to Robin Williams is dedicated to you.

May the healing techniques from Rosetree Energy Spirituality smooth your way, so you find life so much easier than did this beloved performer.

Which photo to use for today’s aura reading?

This man packed so much growth and pain into one lifetime. I’m choosing to research his aura during the period when he played Mork from the planet Ork.

Click here to find the aura, and rest of the photo, with Robin Williams.

Of course, once you learn Stage Three Skills of Energetic Literacy, every photo is an aura photo.

Learn to read auras from this how-to, Read People Deeper.

Just for fun, here’s a photo that a friend took of me, years ago, with Robin Williams… at The Wax Museum at Fisherman’s Wharf in San Francisco. (With a wax sculpture of Robin Williams, that is.) 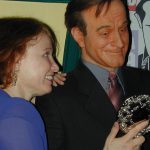 Fills the room — all the way out to where the viewer is. An exceptional, targeted sending forth of joyful, zany energy. Long before the slang expression “Rock your world,” this is exactly what Robin Williams was aiming to do.

Fills the room — all the way out to where the viewer is.  Along with the joy and bounce, Robin Williams is in “The Zone.” And, for this character, “The Zone” includes plenty of akasha-type energy.

This is the first time I have found space energy in an actor. I have found it in auras of astrophysicists, astronomers, astronauts, Stephen Hawking, Christopher Reeve  — and folks debarking at any airport (where the off-planet glow doesn’t usually last for long).

Incidentally, I found akasha galore in the previous chakra databank as well but thought I would avoid mentioning it. Really, Blog-Buddies, I do what I can to avoid making this blog appear really far out. 😉

Fills the room — all the way out to where the viewer is.  Maybe it’s just being in role, or maybe the display at this chakra databank is a form of intellectual functioning available to the actor. It’s certainly extraordinary.

Blog-Buddies, you may be aware than many an actor is off-the-chart brilliant. Not all of them, to be sure. Still, the profession includes more than the usual share of folks with mega-high IQs.

This chakra databank of Robin Williams reveals a plasticity and flow to his intelligence… very much like that of a three-year-old: So shiny, curious, loving to learn.

Can you remember being that way, Blog-Buddies? I clearly recall waking up at a “normal” time, about 5:00 a.m., walking into my parents’ bedroom to wake them up and start playing.

There they were, the ancient grownups (about 27 years old at the time). Slow and stupid and kind of lumpen. Much as I loved my parents, I thought, “Omigod, am I going to have to turn into this too, as part of growing up?”

Aura Reading Databank at the Heart Chakra for Emotional Receiving

Note: This is the first chakra databank being read here that is probably not going to be altered by playing the role of a space alien.

I find an enormous, casual, taken-for-granted kind of loneliness. Evidently not too many people have fully understood and accepted Robin Williams so far.

Note: Here’s another very human chakra databank, not likely to be altered (or included) in crafting the role as Mork.

I find a variety of shyness, as though Robin Williams looks for clues in his personal life, screening people for suitability for truly close relationships.

He drops words as if leaving a trail of breadcrumbs that could lead others to knowing him well. Who will pick up what? Each bit of appreciation gives Robin Williams a clue, some hope that the other person can understand him. He collects those clues, requiring a full set before he can communicate as himself and have genuine intimacy.

Robin Williams can easily become what the other person wants him to be, and he is content to hide behind that — even categorize that way of relating as a way of improving his craft as a performer.

Yet he would really like to be able to relax and enjoy being known as himself. Just that not too many people have passed that test by the time of this photograph.

Frankly, the depth of loneliness is startling.

(Expressing Himself in Quintessentially Human Ways)

80 feet. Ease and grace and flow. Robin Williams feels so good in this space alien role. Acting this part is dharma, the right work for him.

And beyond that, there is a strong Divine blessing supporting him.

Aura reading has taught me that there seldom is there a “Meant to be” quality to daily life. Usually the earth experience is mainly an exercise in free will. Whenever I do Thrill Your Soul aura reading research, I point out to my client if there is this special quality of Divine blessing related to a choice.

Mostly it is rare.

Yet here it is, in abundance. Not rare for Robin Williams.

In his body of work there is much to love and admire. An education in compassion awaits you, if you dare. Could it be, though? Could the greatest achievement of Robin Williams’ career be how he beamed out energy of akasha to children like you and me?

Well, who knew that you could catch auric modeling of akasha once a week, there in your living room, lying on your stomach, watching a sitcom?

Fame Hunger
Why Virtual Reincarnation Might Matter More to You than Spiritual Awakening Or, Even, Enlightenment. Part One