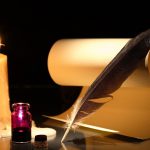 First prize is awarded today to Blog-Buddy JESSICA. She nominated…. Orson Scott Card in our contest,  What Could Possibly Make This Person Tick? Eloquently JESSICA wrote:

“As a kid, he was one of my favorite authors. He writes science fiction and fantasy and is probably best known for Enders Game. But he also spouts horrible homophobic rhetoric.
“This baffles me because his novels contain such nuanced explorations of being different, bullied, and even of close same-gender friendships. On a wider level, he always plays with the idea of the hero and the villain and how someone can call himself a hero while their actions are capable of a very different interpretation from another point of view.
“That difference doesnt equal evil is one of his main points, and I cannot fathom how he could write the books he has and turn around and say what he does about LGBT people.”

Blog-Buddies, it has been more than 30 years since I read anything by this exceptionally prolific novelist. I used to love his work, too.

And now, between the shenanigans in Indianapolis related to same-sex marriage and my recently seeing the magnificent film “The Imitation Game” — the issue of simple fairness for gays and lesbians is very much on my mind.

If you saw this great movie, did you catch the statistic right at the end? The little statistic about 49,000 homosexuals criminally prosecuted (make that criminally persecuted) in England.

When I volunteered at the Whitman-Walker Clinic some 25 years ago, doing Reiki for AIDS patients, I used to say to my friends, “Gay rights are today’s equivalent of the Civil Rights Movement.” I’m glad that most Americans are finally thinking this way, including Supreme Court justices.

Normally I try really hard not to include my political beliefs at the blog, but really, enough is enough. Let today’s blog post stand as an exception to my usual rule.

Yes, it is especially timely to explore the blind spot pointed out by JESSICA in the beloved science fiction writer.

Besides, this aura reading presents an interesting technical challenge. If you want to understand what makes a bigot tick, where do you start? Is there one chakra databank, among a person’s hundreds with a name like “Prejudiced, yes or no?”Haha. You guessed it. There is no such chakra databank. Ask a psychic if you wish, but that would be a psychic reading. For aura reading research, you delve into chakra databanks like the ones I’ll be using here.

Incidentally, if you would like to do research on your own, scroll down to the end of today’s article for nuts and bolts. I’d recommend you do that before reading my aura research, so you won’t be influenced by it. Your perceptions are equally important for learning about the multi-faceted diamond that is ANY human soul.

90 miles. Thank you, Orson Scott Card, for providing a great example of something that is more common than you might suppose!

Sure, Orson Scott Card is a human guy. A super-successful one at that.

However, his consciousness is not positioned vibrationally at human frequencies. Like many, many people today, he is positioned more fully in at an astral  level.

So many of these astral versions of life are tucked into earth experience. Like those nesting dolls you have surely seen, Blog-Buddies, the human level of frequencies is like the outermost doll. Astral levels could be compared to some of those smaller dolls within. While the tiny, sold doll in the center corresponds to the Divine level that is also tucked into earth life.

Many of the people who are addicted to pot or other recreational drugs are living this way. Orson Scott Card comes by this more naturally, and it sure helps him with his literary career. Still, if you ever have a choice about whether or not to live in human-based spirituality, here’s some advice from this Enlightenment Coach:

Choose the human. It’s so much more evolutionary in the long run.

Also I notice a lot of struggle and overcoming difficulties here. Given that theme of bullying, I wouldn’t be surprised to learn that Orson Scott Card was treated badly by other boys, back in the day.

Certainly at the time of this photograph, Orson Scott Card is enrolled in a Ph.D. Program at Earth School related to be “Enough of a man” and fitting in, “despite” all his sensitivity.

Especially because Orson Scott Card is positioned vibrationally in astral frequences more than human ones, all the flows of energy within him are intense. Compared to folk who life in human-based spirituality, he is more about energy. So his chakra databanks are more strongly about energy, compared with most people.

80 feet. Such lovely qualities of caring, understanding, going deeper into life, being connected to others.

Make sense? It’s like having a den in his house decorated with Teddy Roosevelt-style animal trophies. While he has another room like a child’s nursery, delicate curtains on the walls, and such a sweet and soft kind of decor. In this analogy, Orson Scott Card cannot be in both rooms. (And he, until related STUFF is removed, cannot decorate a room that contains elements of each style.)

A problem? Yes. But it’s caused by astral-level STUFF.

Sure, STUFF can always, always, always be healed. 🙂 Rosetree Energy Spirituality is replete with techniques for STUFF removal, and it’s hardly the only method around for mind-body-spirit healing.

Until STUFF is permanently healed, it isn’t unusual for a person to carry forward big subconscious-level torment about being bullied, not being able to win. With plenty of “I’ll show them.” And, in this case, I’m not just commenting about some random person but — no surprise — Orson Scott Card.

1 and 1/2 feet. Confidence goes up and down for Orson Scott Card. He’s very sensitive to criticism.

Again, this problem is not about Orson Scott Card’s gift of the soul at this chakra databank. STUFF is stuck and, in this case, it strongly distorts the functioning of the chakra databank.

Even within himself when alone, there is a great deal of internal drama, ups and downs. On the bright side… Sure helps him write fiction!

3 inches. Withdrawal from the conversation. That’s the pattern in this under-functioning chakra databank.

Once again, if there has been a history of bullying, decades later, Orson Scott Card could still be carrying around plenty of STUFF related to this.

Orson Scott Card helps humanity as a world server by creating and dispatching conflicts in fictional form. In human life, not so much expertise is available at the time of this photograph.

Blog-Buddies, I’m really curious about this chakra databank. Not just to bring perspective related to all I have read so far. Also because I haven’t read auras of many public figures who are connected with the Mormon Church. Here is one essay Orson Scott Card wrote about why he believes that homosexuality is incompatible with his religion. Okay, back to energetic literacy….

It’s one holy mess in there, folks. I would describe it as a lot of rules and regs, lots of guilt and analysis, lots of pain, lots of self-torment. The over-riding quality is no connection to spiritual light available.

Not at the time of the photograph used for aura reading.

Orson Scott Card is such a talented writer, with hard-won skill and exceptional talent both amplified by the connection he has to astral life.

As a world server, he has an inexhaustible supply of conflicts he feels, which he can then describes fictionally.

In his human life, the same sorts of STUFF complicate his inner life. He is way less content as a person than most of you Blog-Buddies who have been my clients.

I know because I read your rankings at Amazon.com and compare them to his. Joke.

I know because every session that I do includes a brief Skilled Empath Merge where I temporarily and clearly experience what is going on in your consciousness.

Gotta love Earth School! Where a man with such brilliant success can live, for a while at least, with such inner confusion and fear.

What if you want to read Orson Scott Card’s aura too?

One way or another, it’s fascinating to use energetic literacy skills to learn about Orson Scott Card.

How my career developed. A guest post by ZELDA
What Does It Mean to Be Spiritual?