Aura Reading of Lena Dunham, Answering More of Your Questions

Again I caution you Blog-Buddies to avoid reading Lena Dunham’s aura. Why? Because of the extreme spiritual addiction from which she is suffering, now and for the forseeable future. I’ll be reading the photo of her that she sent out to promote exercising, as described in yesterday’s post.

Now, without further ado, on to reading Lena Dunham’s aura as it is now.

3. Root Chakra Databank for Awareness of Other People in the Room

All of us have this chakra databank. It’s one of the 50 you have right now, all you Blog-Buddies, in your Root Chakra Databanks.

Unlike you or me, however, that “room” is very large for a famous person like Lena Dunham.

Deep space. There is little interest in people as individuals. It’s more a team mentality: “Are these humans with us yet? Or not?”

“Us” means beings of astral frequency.

That’s because, by the time of the photo used in today’s aura reading research, Lena Dunham is living in extreme spiritual addiction, as discussed yesterday.

Her human identity has morphed into a group identity, where the celebrity collaborates with assorted astral beings. They run her.

From the perspective of the astral beings who are involved in this astrally crowd-sourced spiritual addiction, “humans are beings to collaborate with.” Lena Dunham has been turned in this direction. So her presence now serves as a searchlight, scanning for people in the room with her physically, who might likewise be influenced to join the group.

Extreme spiritual addiction is a sort of team effort, a bit like the “Dr. Who” episode KYLIE wrote about yesterday in Comment 5 at the first part of the aura reading of Lena Dunham. Except for not being nearly so stylish, plus nobody gets to visit the Tardis.

Seriously, the important difference is that nobody has to participate. Some folks will choose to, and that is their learning experience here at Earth School. However, your choice can be different.

And if your choice is to grow in a human way, I’m sure here to help you.

Tomorrow I will post a follow-up article about “How to protect yourself from all forms of spiritual addiction.” For now, let’s get back to reading Lena Dunham.

4. Root Chakra Databank for Awareness of Herself While With Others

Comparing this chakra databank to the previous one can help us to understand how the 28-year-old celebrity is handling all that fame.

Deep space. Due to the extreme spiritual addiction, “herself” has a different meaning from what is usual for a human being with normal mental health.

By now, “Lena Dunham” is a group of astral beings plus one very spaced-out human who feels blissful and comforted by all the astral energy, much like a pothead high on weed.

Loneliness is an epidemic on earth now. Feeling alone is not fun. But I’m here to tell you, Blog-Buddies, suffering from human loneliness right now can be a good thing.

Beware the temptation to join a cult or enjoy the instant “friendship” from becoming an alcoholic or pothead. Or easing into a “spiritual” lifestyle that involves sharing your energies with something or someone that feels superior. Your identity belongs to you, nobody else.

Out to deep space. Lena Dunham is buffered by the astral presence within her aura, smoothing away the rough edges of human experience like a kind of psychic-level tranquilizer.

Witnessing is a term related to a growth of consciousness. Our Blog-Buddy DAVID has written with great clarity on this topic, including What is Witnessing? My perspective on witnessing is different, as I may write about in some future blog post. For now I’ll just say that you could read accounts of witnessing, including DAVID’s perspective, and not be able to relate to that personally… yet still meet the criteria that I use for Enlightenment.

That said, neither DAVID nor I nor any other Enlightenment Coach worth listening to… would advocate the zoned-out, spaced-out quality of consciousness that results from spiritual addiction.

Lena Dunham’s version of emotional self-awareness is, mostly, quite typical of someone in extreme spiritual addiction.

However, there is a trace of intense self-absorption. No doubt a leftover from a special growth area for Lena Dunham preceding the spiritual addiction. She spent years with her awareness highly, highly, even obsessively, focused on her emotional struggles. This involved highly interesting (to her) forms of psychological suffering, and other emotional dramas.

No question, Lena Dunham is courageous. She has gone through so much emotional pain.

Now, even when most of her identity is numbed out, this intense self-absorption, emotionally, lingers in Lena Dunham’s Heart Chakra Databank for Emotional Self-Awareness.

7. Throat Chakra Databank for Communication as a Celebrity

For instance, if you are in a serious love affair with JOE, you will have many chakra databanks related to him, like “Communication with Joe.”

Lena Dunham has, of course, developed “Communication as a Celebrity” in her personal set of 50 databanks at her Throat Chakra. So it can be read at the time of the aura photograph being used in today’s reading.

Out into deep space. The group of astral beings broadcasts energies and information through Lena Dunham much as a cheerleader might broadcast through a megaphone. 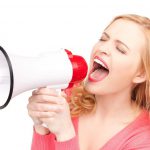 In extreme spiritual addiction, the human personality serves as a kind of useful megaphone for opportunistic astral beings

In the system of Face Reading Secrets(R), you can learn a great deal about any person’s self-disclosure. But aura reading with Stage Three Energetic Literacy can deliver more current insights, plus many nuances that are available because aura reading is a deeper form of… deeper perception.

Out to deep space. As usual for Lena Dunham at the time of this photograph, the over-riding quality is the group-think and teamwork. A collection of astral beings is connected intimately with Lena Dunham’s identity. She has become “us.”

However, in this chakra databank, I notice a gloating, icky kind of chuckle. Evidently it is especially relishable to the entities, having access to Lena Dunham’s identity. They can speak in the voice of someone who is famous for telling it like it is, in a very honest, personal way.

Sigh! Blog-Buddies, might I recommend learning energetic literacy skills? This was one of the themes in my how-to book about gaining success (honorably, and as your human self). As I noted at the turn of the millennium, aura reading is now an essential skill for survival. Or, at least quality of life.

Today, energetic literacy is comparable to the importance of regular Gutenberg Literacy in the last 500 years.

Connection to the Divine seems irrelevant, given the state of Lena Dunham’s other chakra databanks.

Why would that be, Blog-Buddies? Because…

No amount of The Romance of the Astral will bring a person closer to God. Hence my recommending the Capture the Fort analogy, one of the best things I learned when I studied with Maharishi Mahesh Yogi, back in the day. (And, no, I no longer recommend Transcendental Meditation. I’m just giving credit where it is due.)

Look, I know this “Capture the Fort” perspective is very counter-culture in New Age. Well, I’m not scared to be a post-New Age teacher. Despite all the astral flash — and sometimes sanctimony — around the notion of asking one’s guides what to do in life, my perspective is that this outsourcing to astral guides is a very unwise choice.

Living now, in the Age of Aquarius, begging guides to give you advice just puts you at risk for spiritual addiction.

God gave you a brain. A heart. Free will. Why not use them?

Guesses, anyone, at this point in today’s aura reading? How well would you expect Lena Dunham to be expressing her distinctive soul right now?

Hint: Her soul is in a human body, with the potential to express in human ways, as part of her spiritual evolution. Yes, like you and me, Blog-Buddies, Lena Dunham has been given the precious opportunity to progress here at Earth School, during this time of great evolutionary potential, and make her human-level soul expression glorious.

Lena Dunham is getting to make her whole career about expressing herself, sharing her example, “being herself.”

Yet, ironically, that “self” is now a group of opportunistic astral entities with just a smidge left of Lena-ness.

Thus, reading this chakra databank, I notice the equivalent of a big wink from the side of the astral entities.

Well, in response, here is one small human-type eyeroll from Rose. I am so not impressed.

Answering 10 GREAT QUESTIONS about Lena Dunham with Aura Reading. (Answering the First Questions)
How to protect yourself from the Age of Aquarius epidemic of spiritual addiction