Auric Modeling at the Shopping Mall, the Enlightenment Eye Flash and More 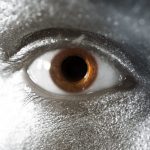 Lately we’ve had some lighthearted conversation around my new hairstyle and how it generated positive attention at the mall. I was invited by DAVID B. (Comment 37) to explore both confidence and auric modeling .

At first I thought, “Golly, is it really going to take aura reading to respond to these questions?”

Sure, I could have done aura reading research. But, seemed to me, there was a much more interesting answer, especially for us at “Deeper Perception Made Practical.”

Conventional wisdom tells us: “The more confident you feel, the more positive attention you will get from others. More goodies altogether.”

Is this true? What does Deeper Perception tell us? For that matter, what can Abraham Maslow tell us right now, as if rising from the grave?

The great humanistic psychologist Abraham Maslow is justly famous for developing this pyramid concept about human motivations.” (Among other strokes of genius.)

Basically, self-actualization begins with security needs. Once these needs are met, we start caring about more refined needs and desires, culminating in what Maslow called self-actualization. Each of us climbs the pyramid of needs only on a need-to-find basis.

Isn’t that’s true of your life, in terms of your priorities right now? If you were struggling to survive, you’d hardly have time to read or comment here.

Back in the day, when a young adult, didn’t you have to establish yourself with the basics first?

Blog-Buddies, you put these in order of your priorities, of course. Still, your version of survival needs has formed the basis of your lifestyle ever since adultood. True?

Well, what if you receive a shakeup — like moving or finding a new job or a divorce? Immediately you would have to get all those basics sorted out anew.

And then might you rapidly move on to higher needs? Knowing you, Blog-Buddies, I’m guessing you wouldn’t be content to simply accumulate enough live bodies to form your social life.

No, you wouldn’t simply want healthy-looking bodies or sexy bodies, either.

As various survival needs were met you would be seeking people who could become your spiritual companions on your path of self-actualization.

You know, like Blog-Buddies at this sweet, smart, kind online community! Where, improbably, I serve as an Enlightenment Coach as one of my various roles.

Where Does Auric Modeling Fit in?

Subconsciously auric modeling is always being noted by you… not just because it is always being recorded subconsciously. True enough, every single person at the shopping mall and elsewhere — the state of each person’s aura is always a factor, but usually way in the background.

For practical purposes at your nearest shopping mall, how much does auric modeling matter?

Take Shopper Joe for instance, the 25-year-old guy who gave me a glance at my last mall venture. He walked slowly, unhurried to put it mildly. Based on Joe’s body language, I suspect that he was engaged in a typical act of murder that happens so frequently at a shopping mall: Killing time. 😉

Point is, he couldn’t have cared less about my auric modeling. Joe was in survival mode — which is when we notice the obvious demographics related to survival.

Survival needs win, followed by demographics, right? Spotting me near him at the near-empty mall, maybe Joe’s list of survival priorities went like this:

Well, we humans are animals. Not only animals, but always living in an animal body. The day we don’t give that aspect is due, we aspiring humans become ineffective as humans.

With very human, distinctly survival-oriented Joe, I rated enough to win a very, very subdued “She lives.” Hence I was accorded a passing glance.

Yes, I enjoyed that enormously. Because for the past 20 years I have flunked Question #3. And hence was awarded no passing glances from the likes of Joe.

About how much did this happy event have to do with my auric modeling? Exactly zilch.

About that Alleged Confidence Factor

Even if my new look had given me great new confidence, that wouldn’t have mattered to Joe.

Actually the new look didn’t give me new confidence. Because my confidence was fine before, equally fine after.

I didn’t change my hair look because I was lacking confidence as a person. (JNANA had it exactly right in her Comment 41 at our New Look conversation.) Instead I was simply playing a social game. Don’t most of us play that game?

Let’s contrast that with a fascinating thing that has happened ever since I crossed the threshold into Enlightenment. This has happened to others I’ve asked about it, too.

Back at the mall, Joe was living from the bottom of Maslow’s Hierarchy of Needs. But what if somebody at the mall was living at the pinnacle?

Somebody who is pretty darned awake inside, and yearns for more “normal” consciousness, a.k.a. “Enlightenment.” Somebody like… Gladys.

She does notice auric modeling subconsciously, and when Gladys encounters something notable, her inner self will wake the rest of her up for a brief conscious moment.

So there I go, at the shopping mall or elsewhere, wearing the auric modeling of somebody who lives in householder Enlightenment. Strangers pass by at random, many like Joe. Others paying attention higher up on Maslow’s Hierarchy of Needs, maybe caring about love and belongingness. Or yearning to boost self-esteem.

And then there is Gladys, maybe not yet in Enlightenment but approaching it. “Self-actualization needs” — that’s where Gladys lives on Maslow’s pyramid.

As Gladys and I cross paths, I see a split-second registering of my auric modeling. The probing look zaps out super-fast, right through Gladys’s eyes. It’s a double take, a spiritual one. Sort of a quiet “Aha!”

Trust me, this isn’t the same as if I had been observed pointing a gun at her face. Or wearing super-cute outfit.

Gladys has given a reflexive response, what I call the “Enlightenment Eye Flash.”

Noticing Is Structured in Consciousness

In this example, I’m paraphrasing a gorgeous saying from Maharishi Mahesh Yogi, “Knowledge is structured in consciousness.”

Subconsciously Gladys responds to life based on her position regarding the Hierarchy of Needs.

Gladys may never consciously notice a thing, but her eyes betray that quick moment of recognition. And relief. “I’m not marooned on earth for ever. My soul memories of heaven and God are still true. One way or another I will awaken from this dream state of life on earth.”

In 1968 I had the good fortune to sit in a small group of people, one of the first to hear Ram Dass speak after his return from India.  This was long before he wrote “Be Here Now.”

This time he was just hanging out with a college professor and some undergrads who had been invited to an informal free event.

One of the stories that Ram Dass told us that night concerned what it was like for him when he returned to America.

He found it fascinating to walk down the street, anonymously enjoying his flashy new version of Enlightenment (the man had been involved in the flash of LSD proselytizing at Harvard, so it isn’t surprising that he gravitated towards the flashy aspects of Enlightenment).

Anonymously because there was no surface-level fanfare. Who noticed?

Well, one woman did notice that splendid auric modeling. She crossed the street and exclaimed, “What an aura! It is my honor to meet you.”

More than an Enlightenment Eye Flash for her! Most people don’t respond that way, however, in 1968 or now. (Of course, for us, living in the Age of Awakening, I wouldn’t recommend walking around reading auras all day long. Now is not 1968.)

Yet still, there can be a quiet recognition, curiosity. Much as happened this week when I stumbled upon my first photograph of Abraham Maslow’s fellow luminary, the great Carl Rogers. One look at his photo and I registered something akin to an Enlightenment Eye Flash. I wasn’t reading auras. Yet I responded.

Later I used some Technique Time to do a proper aura reading and then added him as the latest addition to the Enlightenment Life List.

Consciousness has a lot to do with noticing. Based on your human priorities, including the Heirarchy of Needs, you will notice life’s spiritual beauties today. While evolving fast in human-based spirituality, you’ll notice whatever you notice. And that will be exactly right.