Cutting a Cord of Attachment to a Player 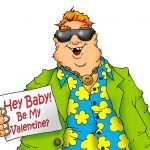 Not all sleazy lovers identify themselves with a sign.

Sophie was a little bit in love. She had only known the guy for a week, but that Alexander was oh-so-charming.

Could he be her Prince Charming?

Sophie’s intention for our session was to trust her love life to be fulfilling. That mattered because all her previous love interests had disappointed her, to put it mildly.

By the end of her session, Sophie felt so much better.

And it occurred to me that you Blog-Buddies might be interested in reading about what happened, so I asked permission to share part of her story (changing details, of course, to protect confidentiality).

Have you ever been manipulated by a player (or other kind of big serial flirt)? Then you’ll want to read today’s article.

Actually, this RES case history can be of interest for many reasons. For instance, you may learn some technical points about cords of attachment… that maybe you didn’t know before.

That includes a different kind of cord item than I’ve written about previously. Not a regular cord item, like the many examples given in “Cut Cords of Attachment with Energy Spirituality.” And not a process-oriented cord item. But something entirely different….

How Could Sophie Have a Cord to Alexander So Early in the Relationship?

Sophie was shocked to learn this was possible. Yet some of you Blog-Buddies know how a person gets a cord of attachment.

what gets installed in your aura?

And also a sacred, beautiful spiritual tie (that you keep for life, maybe longer)

A cord of attachment to that person (now “the cordee”)

There’s just one exception — if you have sex with that person right away. JOKE.

The exception is if that person you become interested in is deceased (at the time when you first become interested). Like if you become a big Jane Austen fan. “Pride and Prejudice” is a great book, but it won’t make Ms. Jane become literally immortal. So no cord of attachment to her!

During the week that Sophie knew Alexander, they had emailed each other. That’s plenty to have a cord of attachment, right?

Sure, they only met once. So what?

Actually that’s when the set of cord items became far worse than previously.

You do know that cord items change, right? And always in the direction of “Bad to Worse” or “A higher number on the Yuckiness Index that RES professionals use to evaluate cords of attachment.”

This particular cord of attachment scored 10 out of 10 possible points on the Yuckiness Index.

Here is the sequence of cord dialog that was in Sophie’s cord of attachment to Alexander… at the time it was removed permanently.

Which incident became stuck in Sophie’s cord of attachment? It was on their first (and only) date. They were in a cafe, where the date had been going on for a while.

So What’s the Unusual Kind of Cord Item in this Cord of Attachment?

Intrusive Cord Items. In this cord dialog, the sequence from Cord Item #2-#6 was a set of intrusive cord items.

What is an Intrusive Cord Item?

A person is acting pushy, trying to manipulate the other person into doing something.

Technically, it could be called “Sending psychic coercion,” a form of STUFF that you can learn to heal with Book One in my series of Energy HEALING Skills for the Age of Awakening: “Use Your Power of Command for Spiritual Cleansing and Protection.”

Did that automatically have to get stuck in a cord of attachment? Nope, it’s just that Sophie was vulnerable to that kind of approach. (Remember what was written here earlier about the dismal experiences of her love life so far?)

In case you’re worrying… did Alexander’s moves mean that Sophie would automatically receive psychic coercion in her aura? Nope, because you can learn how to keep that from happening. It’s quite easy, really, and covered thoroughly in that previously-mentioned book for self-healing.

And, ooh, do these Intrusive Cord Items count as psychic attack? Is Alexander an energy vampire?

Nope. He’s a manipulative flirt. He’s a creep. He’s a player. That doesn’t give him energy superpowers.

There is no such thing as a “psychic vampire” or “energy vampire,” and I would encourage you to wonder about the aura reading skills of anybody who tells you about these alleged boogey monsters.

Plenty of folks are finding them… because they haven’t progressed past the beginner stage of energetic literacy. They’re like kids who can’t tell a p from a q. Would you call that word-type literacy?

Once a person gains full energetic literacy, that person won’t spread this kind of fear-provoking nonsense.

You know, there’s nothing horrible about putting the moves on somebody you find sexually delicious. There’s nothing wrong with thinking hard your own version of “I think I can.”

In the case of my first kiss, it was more like being with him and thinking as hard as I could,  “Kiss me, JOE.”

Followed by a triumphant note in my diary, “I made JOE kiss me.” Hey, I was an adoring 16-year-old. It probably didn’t take long for JOE to figure out that I was yearning for him.

At the time, I thought that my tiny attempt at “making” him want me was what it meant to “be sexy.” Fortunately I’ve learned otherwise. My little attempt at contagious mind control wasn’t good karma for me. So it’s good there are better interpersonal skills; Blog-Buddies, you probably know them, too. Or else you can learn.

Results for My Client Sophie

Here are some of the results we discussed, just because that particular cord of attachment was gone forever:

It would be easier for Sophie to re-evaluate her relationship with Alexander.

Sophie could relate to his seductive gaze, incidentally. “I remember that part of our date, while we were at the cafe. Before we moved on to the restaurant. He DID look deeply into my eyes and I had a quick thought he was sending something towards me.”

It might be easier for Sophie to NOT become sexually involved with this player.

Sophie laughed when she heard Cord Items #8-10. “Sounds like me,” she said.

In the future, Sophie would think twice (or more) before spending time with a player.

She would do better at recognizing sleazy, manipulative flirts.

“I feel proud of myself,” Sophie told me. “He asked if he could kiss me good night and I said no. Now I’m really glad that I told him no.”

She left her session with new confidence about her love life. I especially appreciated her saying this:

I have always liked to meet attractive men.

Skilled Empath Merge with Angela Lansbury, 89 and at the Top of Her Game
Announcing My New "Mystery" Workshop for July 9-10. Meet "The New Strong."