Spiritually, Why Your Life Is So Very Important 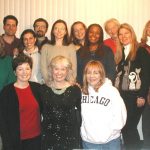 JULIE BLAKE EDISON, right behind me every step of the way

Today’s blog post is dedicated to JULIE BLAKE EDISON, who wrote this Comment #11 at Finding Your New Direction for Success, Health, and More. Newsletter Announcement.

Quoting Rose’s newsletter “have you ever felt downright tormented because you needed to find your way and it seemed as though that vital information was cruelly being withheld from you?

Then from JULIE, “Yes, and in my case sadness. Sadness that God had given other people important things to do, and left me hanging. As in ‘You do whatever.’

JULIE BLAKE EDISON. Only the first of all in the RES community to move into Enlightenment!

JULIE BLAKE EDISON. Only the long-time volunteer who booked my appointments for RES sessions FOR YEARS, before Mitch came on board to help!

JULIE BLAKE EDISON. Only the astoundingly evolved being in human form who can be seen in group photo after group photo, when I gave workshops back in the day and there you were every time. Finding the money to attend. Inspiring me with your participation. In every class photograph, standing directly in back of me. Standing there like an angel, protecting me.

If I had done a decent job of saving all those class photos from back in the day, I would have a lot more to display today, right on this blog post. At least I was able to locate one of them for the top of this article. 🙂

You see, JULIE, I don’t know most of what you have done in this lifetime… at every one of  your jobs… official and unofficial.

But I do know that you are one of the ones who have made possible this field of “Rosetree Energy Spirituality.”

Small Aside about that Name “Rosetree Energy Spirituality”

This field does bear my name. “Rosetree Energy Spirituality” for long and “RES”  for short. (And, to me, more comfortable.)

Because enough people have been doing things in the name of “energy spirituality” that I felt I had to claim a variation of that name that wouldn’t be taken by others, diluting this particular field of knowledge.  For giggles, I just googled “energy spirituality” and found 42,700,000 hits.

Trademarks are useful only up to a point. Who has the time and money to pursue every infringer on “Empath Empowerment®,” for instance. I figured “Rosetree Energy Spirituality” wouldn’t be taken by others. I mean, really, who else would want that?

Back to You, Julie, and So Many Unsung RES Indispensables

This field may bear my name but it never, ever could have been as developed as it is now… had it not been for so many others.

You, Julie. And Kathy Wilewski, the Lilylady. And the prolifically talented Kristy Simmons, once a teenager called “Beautiful Flower.” All of whom made appointments for me. And if they hadn’t protected me in that way, I doubt I would have had the strength to continue to doing sessions or have energy enough to write books.

And what about Tara Morrell, a fabulous dancer as well as having her own money-making career I won’t mention here. Tara spent 12 hours straight uploading my modest collection of YouTube videos. Totally volunteering, and such a gift! Without her, so far, what would I have exactly nothing. (Okay, exceptions are the batgap interview and a couple of podcasts by Connie Bowman.)

Blog-Buddies, it would take me most of this day to acknowledge everyone who has helped me. Some of you are regular Blog-Buddies now. Well, please feel my gratitude, wrapped in situationally necessary silence.

Suffice it to say that I would not have managed to bring a new field of knowledge into the world (admittedly without even knowing I was doing it, not for decades), except that I have had — and continue to have — and I personally need — so much help.

Every one of you is a kind of spiritual stockholder for the initial offering of RES. Whatever good karma dividends may come to me, they also go straight to you.

Back at the Larger Question for Most Human Beings

How do you make a difference, spiritually, in this world?

You do it every day of your life. You carry your auric modeling. No extra work needed, but that hardly means “No pain, no gain.”

One of the mysterious laws of this topsy-turvy Earth School, where so many things that seem way important aren’t and so much that goes unheralded really, really matters…

That law goes, “Spirituality is caught, not taught.”

Sure, some folks like me NEED to be spiritual teachers, and so we’ve been given the chance to do it. But so many others, far more evolved, didn’t come into life with this particular craving.

Every one of us, regardless of our Earth School status labels or how we support ourselves financially, each one of us is created equal. Each of us carries around our current auric modeling.

This is how you help other people spiritually. You do this every day of your life. In the library. At the supermarket. Cat-sitting for a grateful pet owner. Or whatever!

You do that auric modeling without ceasing, every social interaction and all your waking hours.

Besides sharing your auric modeling, you also serve as a spiritual teacher through your speech and action. Every bit of good manners. Every act of respect towards another person. Every time you say “No”  — when that “No” really needs to be said.

Every day of your life, Blog-Buddies, you shine that spiritual light. As for those who care about such things. (You know, like God.) Don’t you think they take notice?

After this incarnation, at your life review, you will scroll through — and feel — and taste — the full list. For now, if you’re not fully convinced of any of this, just take my word for it, okay? (I know about this from having facilitated many sessions of Soul Energy Awakening Hypnosis® that include re-visiting a Life Review.

Yes, as they say in those obnoxious TV informercials, only when I share those words with you now — it’s probably motivated by a pretty different intent.

What does it mean about you if you haven’t had one strong, set, meant-to-be purpose in this particular life? Well, here are some possible answers. Might any apply to you?

#1. You didn’t grow up 100 years ago or earlier, when your “purpose” was decided for you by others, as happened for every other child in the village.

Well, congratulations on that one.

#2. In making your Life Contract for this incarnation, you didn’t have life work decided for you as a firm meant-to-be.

Well, there’s some value to that sort of obvious life purpose. Like being a Mozart.

There was only one Mozart. I can’t read his aura from a photo. (Small anachronism problem there.)

But from what I know, he was usually broke. Depended for his livelihood on music patrons, whom he often had good reason to despise. Had plenty of STUFF that ran him and detracted from his quality of life as a human being.

So that human lifetime of clear life purpose and definite meant-to-be work isn’t only rare. It might not usually be such a bargain.

#3. You did have to figure out your life path as you went along.

Aha! One of the most common, GREAT, POWERFUL ways to evolve at Earth School.

Sorry that this isn’t necessarily fun.

If it’s any consolation for all the uncertainty and the struggles, guess what? Even if you didn’t know the wonder of it at the time… You still get to keep every bit of the spiritual evolution caused by having to figure out what on earth you would do with yourself.

#4. Maybe you haven’t always had the highest social status or the biggest bank account.

Sorry about that. I can relate.

So please forgive me when I write, “So what?”

In terms of your spiritual evolution, do you think these things matter even as much as pool of vomit?

At least the throw-up might have been part of a useful process for the person’s health. 😉

Most Old Souls Don’t Have One Purpose

Younger souls, the less mature ones, often come into an incarnation with a definite life purpose, a meant-to-be “This is what you will do in the world.”

An old soul, and especially an ancient being like that JULIE BLAKE EDISON, often lives as an on-call emergency worker.

I doubt that many of you oldies would even have ordinarily bothered to incarnate on earth any more — Earth School not being the only place to evolve.

At other times in history you would have been content to enjoy being an angel.

In short, I doubt that many of you would have incarnated on earth except that you wanted to be here now. During this so-historic time of the transition into the Age of Awakening.

You knew there would be great turmoil, anxiety, confusion, spiritual anguish. Yet you chose to be here. You wanted to help as much as possible.

And so you came.

Of course, given your stature as a soul, you didn’t have to work out some meant-to-be karma.

Plus, you came with more talents than any human being could ever use in one lifetime.

So how did you incarnate? You agreed to have some “whatever” kind of a “career” at any given time, but this so-called career wouldn’t matter terribly much to you. That way you would be free to drop it and help however you felt spiritually that there was a need.

And then you’d step into that job. What you would do would be brilliant. Would other people notice? Probably not. But with your level of soul evolution, that wouldn’t stop you. And you’d still do an amazing job.

Afterwards you’d be back to “whatever,” awaiting your next assignment.

Would other people notice? Would you be praised in public? Would you star in a so-called “Reality” show?

No, you would do something far more important. Unheralded, like most people who serve God as the purest devotees, you would have an outwardly quiet life. Pretty uneventful by earth standards.

Maybe not that big a deal, while on earth. Because the the spiritual glory of a human life seldom shows, except to those who care enough to pay attention.

Cutting a Cord of Attachment to a Lawyer. Paying the Hidden Price.
The World's First Workshop All About Skilled Empath Merge. A Guest Post by ISABELLA CATES