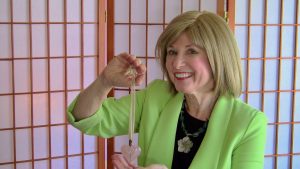 What Enlightenment Is. Many practical resources for spiritual seekers (and finders) are packed into this article.

Describing Enlightenment in My New Video

Today I uploaded a video to introduce this blog’s Enlightenment Life List.

This video is a something. Not fancy. But at least maybe you can find some useful information.

Golly, that could be my epitaph, you know! The video lighting is so NOT flattering, and oboy, this is not nice to do to a woman of 68! But no repining…

Here’s a link to the newly uploaded Intro to my Enlightenment Life List. (Please give it a thumbs up, to help others decide it’s worth watching.)

And an answer to the question, “What could Enlightenment be?”

Here’s my perspective, as someone who — over the years — has become an Enlightenment Coach.

Without the ability to read auras (a.k.a. energetic literacy), how can you gauge Enlightenment? It’s pretty chancy, to put it mildly.

Enlightenment means that a human nervous system has become really strong, spiritually. And then Divinely graced. Because only God chooses when to give somebody a higher state of consciousness.

What Enlightenment Is? My Understanding Continues to Develop.

I mention this, Blog-Buddies, just in case you were wondering… if I thought I knew everything already. 🙂

Of course I’m still learning. You’re invited to join in the discovery process, especially about Age of Awakening Enlightenment. In contrast to a more traditional version, the only option in the last age, and still available as a sweet option now. Just not the only option. Later this year I will be describing it terms of the name I have settled upon for this, the Surrender Model of Enlightenment. (At this time, my blog refers to a name I’ve been using along the way, “The Simplicity Model of Enlightenment.”

By contrast, in the Age of Awakening, millions of people are going to be able to move into Enlightenment, and do it as householders.

What Else Might Help You to Refine Your Understanding of what Enlightenment Is?

You can hear a discussion of my own experiences in Enlightenment, check out this video interview. Thanks, Rick Archer, host of Buddha at the Gas Pump. 🙂 Rick, it’s an honor to be included at your website.

By 2016 I’ve begun referring to one of my roles as “Enlightenment Coach.” This blog post reflects my emerging understanding about how higher states of consciousness develop within Age of Awakening Enlightenment.

As a facilitator of Rosetree Energy Spirituality (RES) sessions for aura healing, I think this is good to keep in mind: Why aren’t most spiritual seekers living in Enlightenment yet?

Despite the beautiful aspirations, held in conscious understanding, subconsciously their auras are driven by STUFF.

Any skill set that permanently moves out STUFF and wakes up the soul… can help a person move forward more rapidly on his or her personal, sacred path to Enlightenment. My motto with RES goes, “STUFF can always, always, always be healed.” And this helps make the difference between a sweet experience of Spiritual Awakening. Versus a stabilized state of consciousness, with an aura in Enlightenment.