Age of Awakening Enlightenment, India! It Has Begun 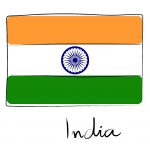 Not just America, Canada, and England! Among members of the loosely knit community around this blog and Rosetree Energy Spirituality (RES) — now, for the first time, an addition to my Enlightenment Life List from India!

At my personal Enlightenment Life List, I have acknowledged many magnificent people who have attained Traditional Enlightenment through study in India. Sometimes under the influence of gurus from that part of the world.

Regarding Age of Awakening Enlightenment, though, hooray! My very first sighting in India has happened. Thanks to my long-time client D.G.

Early into our latest session, I facilitated a Skilled Empath Merge. That’s when this Enlightenment Coach noticed the shift to his state of consciousness.

Only quite rarely do I use a certain procedure, among the many skill sets of Rosetree Energy Spirituality (RES). “Enlightenment Validation,” it’s called.

Basically it’s a combination of Stage Three Energetic Literacy and skills as an Enlightenment Coach.

Regarding Age of Awakening Enlightenment, India native D.G… has passed with flying colors.

All over the world, not just India, Age of Awakening Enlightenment is growing.

Such a Triumph Tale: Age of Awakening! Enlightenment! India!

Before his own words, let me introduce the story of  D.G.’s unusual culmination of his path to Enlightenment. A beloved client who has had so many dozens of sessions with me, ever since 2009.

His entire adult life, D.G. has inspired others through his leadership and loyalty to his family, highly successful in his high-level career. Unfortunately, years ago, he began to develop mysterious health problems. Eventually, these problems became severe, impacting his work, even life-threatening.

What Could Be More Terrifying?

Perhaps this: Although extreme health problems were undeniable, the cause remained a mystery.

None of the medical specialists D.G. consulted, not a single one, has been able to diagnose an actual disease. Including both allopathic physicians and practitioners of complementary medicine!

D.G.’s suffering has been intense. Yet through it all, he felt connected to Spiritual Source. Beyond that, I’d say, he has demanded not to lose faith in this sacred connection.

Seems to me, this brave man has sometimes felt unbearable discomfort, terrible fear. Having a human, animal body, he had no other choice. Not, for those moments. Soon afterwards, though, every time… this deeply stubborn man insisted on honoring his sacred connection. Surrendering to That.

For 2 1/2 years, I’ve struggled with some intense suffering. Also for a long time there was a lot of anger, frustration at my situation. And anger with myself.

But eventually with free will, and desire for knowing and experiencing God, what happened?

Somehow the grace of God moved me more towards acceptance of what was happening. Also my acceptance grew.

What is in our control? Only things our actions, not the fruits of it.

Fruits of our actions may be determined by past karma. Or, in this complex world, due to so many other things.

But whether in health or career, we can just always do our best. Even without having control over the results.

One lesson in particular I learned, internalized, and experienced more and more during this time. The serenity prayer…

Asking God to give us:

Beautiful Choices, Glorious Use of Free Will

Seems to me, D.G.’s choices are responsible for this first RES-flavored instance of Age of Awakening Enlightenment, India!

Most of all, what impressed me most? Over time, what happened to his seemingly inevitable (and very human) kinds of doubt?

Didn’t he feel an increase in bitterness towards all that unremitting pain?

And how come? Seems to me, that was the power of D.G.’s free will.

Because he did every smart and good thing possible to restore his health. Simultaneously he insisted on strengthening his connection to Spiritual Source. Every single day.

Extreme pain and frustration, day after day — D.G. has endured all that and more — while doing his simple human best.

Not for the first time, I grateful for my background in Hinduism. (Coming courtesy of the years when I worked as an initiator for Maharishi Mahesh Yogi, teaching TM.)

Beyond that, I’ve struggled to understand what was going on with this mysterious illness. Not only inexplicable. All of this seemed so cruel.

However I did know the concept of tapas, or sacrifice willingly undertaken for the sake of spiritual evolution. Was it possible that Divine help, especially the Ascended Master Shiva, could have a hand in this?

Seemed like that to me, based on aura reading research. Some extra knowledge about that lit up the day of D.G.’s Enlightenment Validation. Because I had the privilege of researching the amazing transformation of his aura, fresh from moving into Enlightenment. (Probably within the past week.)

“Fires of Shiva” I found. Not that I was sure this was an expression anybody else would ever use. Doing the best I could, I explained this information delivered through energetic literacy:

Fires of Shiva occur when Shiva helps to speed up a person’s evolution by creating (what seems like) inexplicable destruction. Totally unfair suffering. Apparently.

Nevertheless, Fires of Shiva are not bad karma. These troubles make no sense in terms of that person’s astrological chart. Or health history.

Since Fires of Shiva are… in a way… miraculous. An expression of the grace of God.

Turns out, D.G. was very familiar with this expression. Never before that session, however, had he connected this with his own personal experience.

I’m glad all this helped enrich D.G.’s experience. Especially since I’ve googled on Fires of Shiva and found what on Google? Amazingly, nothing! (How often does that happen on Google? Of course, I didn’t do my search in Hindi.)

Sharing Householder Enlightenment, India! with You

Thanks again to D.G. for allowing me to share this story with you.

Blog-Buddies, may it bring you inspiration.

Also comfort, if you have been suffering from crazy-weird problems with health or finances or more.

Despite all this, you can evolve spiritually.

It’s so wise to do the very best you can, on a human level. (If he hadn’t, would D.G. would still be alive today, let alone beginning to thrive? I doubt it.)

Fulfilling our human responsibilities — that always matters. However, what’s the other thing we can do?