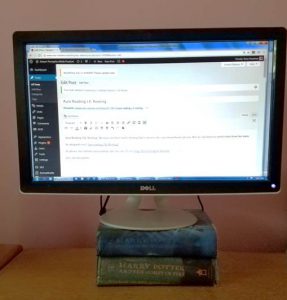 Aura Reading Rowling, my computer is propped up by which two books?

Aura Reading Rowling? Because you don’t need a Sorting Hat to discern she’s an extraordinary person. Of course, we can learn so much extra from her aura.

So intrigued was I, face reading J.K. Rowling! Of course I jumped at the chance.

First of all, though. Inside info about this Harry Potter fan.

In case you’re wondering, sometimes I prop my feet up as well. For that footstool, what do I use? Webster’s New World Dictionary.

Yes, you can verify all these literary wonders. Just come here for an in-person session of Rosetree Energy Spirituality (RES). You’ll find a very human environment, with humor built in, for THE FOUNDER of RES.

Now Back to The Important One Here, Jo Rowling

As always, for celebrity aura readings like this one, I’ll use Stage Three Energetic Literacy.

Let’s research this photo. Then, faster than you can say “Accio,” we’ll summon forth insights.

What’s it like to be this to be this highly influential writer? At the time of this photo, many years into her amazing success. No longer engaged in a rags-to-riches story. Just quietly rich ‘n famous.

Think about it. J.K. Rowling is nearly as famous in reality… as Harry Potter was in the wizarding world. (And she’s richer, too.)

Yes, Blog-Buddies, I decided to start here. RES helps people in many ways to develop a more commanding presence.

Incidentally, are you curious about presence? Here’s a link to 10 articles about personal presence at this blog.

The size of this chakra databank might seem a bit over-functioning. Except let’s think context: Clearly, this is a publicity photograph.

Details learned through exploring this chakra databank reveal that J.K. Rowling is purposely performing. Not pretending she’s got no difference between personal life and a famous public persona.

Actually she’s a very reserved person. And she’s got scar tissue in this chakra databank to prove how she’s grown. Purposely, and with a sense of duty, Rowling has learned how to endure publicity photos, etc.

Service informs her presence. A public presence that is wholly unlike the ego-driven presence of most celebrities.

Clearly (to this Enlightenment Coach, anyway), J.K. Rowling is in Enlightenment. Everywhere within her aura, God is peeking out. Joyfully sending Rowling-flavored light into this world.

Partly I choose this chakra databank due to timing. It’s two days before giving my new workshop “Gaining Wealth as a Life Sport.”

Mostly, I was curious about Rowling’s relationship to wealth.

Bet you didn’t know this….

In 2004, Forbes named Rowling as the first person to become a U.S.-dollar billionaire by writing books, the second-richest female entertainer and the 1,062nd richest person in the world. Rowling disputed the calculations and said she had plenty of money, but was not a billionaire….

In 2012, Forbes removed Rowling from their rich list, claiming that her US$160 million in charitable donations and the high tax rate in the UK meant she was no longer a billionaire.

Now, Back at the Chakra Databank, Symbolic Size

Clear, crisp attitude towards having money. Including accumulation of wealth through savings.

About as thrilling as finding pebbles on your driveway. Not despised. Just not elevated.

Given the extraordinary power of Rowling’s creativity, I’m so curious to research it at a subconscious and astral level. Three cheers for Stage Three Energetic Literacy!

Evidently the prolific writer has a complex relationship with her own creativity.

At the time of this photograph, J.K. Rowling is plodding. Dutifully using creativity to follow through. Completing projects. Something we adults must do if we’re responsible.

But there are phases in life. And J.K. Rowling hasn’t allowed herself to become a creativity prima donna, refusing to use creativity except in the ways she prefers.

Really, despite all that wealth and fame, guess what? I’m surprised to discover…  Creativity-wise, you couldn’t find a better-adjusted human being

All of us must handle conflict, use our power, deal with difficulties. What about J.K. Rowling?

What do I find most strongly? Exceptionally vivid awareness of human suffering.

From this chakra databank, I gather… in her personal life, she’s handled a great deal of conflict.

Also, J.K. Rowling identifies with the struggles and conflicts of other people. Not just her personal portion of troubles.

In a quiet way, and without seeking credit, Rowling aims to make a difference.

Which optional databanks develop at different phases of a lifetime? That depends on one’s lifestyle, choices, spiritual path.

Seems to me, it’s to her credit that Rowling has this one.

Although not overwhelming. Because J.K. Rowling has developed such inner strength over the years. Again, loads of scar tissue.

Many a Fundamentalist zealot has condemned the Harry Potter books.

Reminding me of a thread that developed recently over at our blog post about Spiritual Aura Reading. (See Comments #23-30, plus others that follow.)

I got a kick out of her self-defense  in that hyper-religious context. Enjoy this full article or just the following quote:

“My critics are at liberty to claim that I am trying to convert children to Satanism. And I’m free to explain that I’m exploring human nature and morality  or to say you’re an idiot, depending on which side of the bed I got out of that day.”

Exceptional love for humanity. Living in Age of Awakening Enlightenment, Rowling has quite a lit-up connection to the Divine.

In addition, there’s the ongoing presence of a particular Divine Being. Her private business.

When you learn to read auras from photos, I think you’ll find it quite easy to tell which one is here. Beautiful!

Recently I observed that J.K. Rowling carries a lot of pain. A Blog-Buddy was incredulous. Having been taught (erroneously, IMO) that Enlightenment takes away all pain.

Enlightenment is a state of consciousness. Attained by an evolving human. One particular human at a time.

Of course there can be pain. Especially for someone who has donated millions to charity, who pays her taxes, and who dealt with plenty of personal misery long before becoming an acclaimed author.

After reading her aura today, I’m more impressed with her than ever. This particular human, J.K. Rowling, is one of the jewels in earth’s human crown.