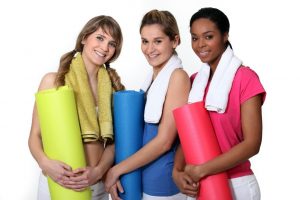 Yoga Teacher Cord of Attachment. Could turn out to be way uglier than these three yoga mats.

Yoga Teacher Cord of Attachment. After taking one yoga class, what could have limited Gladys for the rest of her life?

And how might cutting this cord of attachment help her?

This blog post highlights the surprising contents of my client Gladys’ cord of attachment. To a one-time yoga teacher.

Easier to Get than Doing Child’s Pose!

First of all, background galore is at our previous article. About cutting cords of attachment related to disappointing spiritual leaders, energy healers, etc.

Second, please know that my client Gladys felt much, much better after our session.

A session of RES Energy HEALING. Where the Healing Centerpiece happened to be… 12 Steps to Cut Cords of Attachment®.

Now let’s get to it. Learning Asana!

Yoga can really be wonderful. Personally I’ve done loads of yoga, especially Kundalini Yoga. Gladys, my client, also likes yoga — as an occasional pursuit. So she expected to like the class her friend took her too.

Unfortunately, how did Gladys feel after that yoga class? Not good. And not quite like herself.

But her RES session helped. And Gladys gave me permission to share the following with you Blog-Buddies.

Before reading, you might wish to put on a hat. Because these cord items are kinda hair raising.

What Was Weird During Class

Towards the end of a yoga class, it’s customary to have a bit of meditation.

Note: Never once, taking dozens of yoga classes, did I encounter a good quality meditation. No surprise, really. I feel sorry for spiritual seekers who think yoga classes are the place to go for learning meditation.

Most outrageous example, in my yoga class history? The Kundalini Yogi teacher who announced, “Now I’m going to teach you Transcendental Meditation.” Then he gave us a 10-minute disgrace to the name of ANY form of meditation.

At the time, I was still active as a teacher of the Transcendental Meditation(TM) Program. Accordingly I spoke to him after class was done. He insisted that he had said he called it “A transcendental meditation.” No way was he misleading his yoga class.

Apology? Remorse? Apparently he hadn’t learned to bend over that way. 😉

About the weirdness in Gladys’ class — there wasn’t just an extensive bit of meditation in this class. There was chanting. Quite a bit of chanting. And chanting to Shiva. A Divine Being who is not for casual playing around.

Anyhow, here’s what I found in Gladys’ cord of attachment to that one-time yoga teacher.

Gladys had no cord items in the dialog box. All came from the yoga teacher:

Secretly and sneakily trying to convert somebody else?

That breaks a spiritual law. One of the worst of spiritual trespasses.

It’s one thing, Blog-Buddies, to have one conversation. Once. Where you tell somebody about a path that you think might prove helpful.

One time only. And no pushing.

This yoga teacher was presented to Gladys and her friend as “really authentic.” Because she came from India. And was trained there.

Labels sure can be part of the illusion of Earth School, can’t they?

Results for My Client

Logical consequences — or likely results — for my client included:

A session bonus: Just to make sure that the connection with Lord Shiva was broken in an effective manner, phew! I was able to use some of the skills developed along the way. So I had a bit of a conversation with Shiva.

Gladys had his blessing to leave the implied connection to him. Correct?

Shiva came as close to laughing as I’ve ever seen. (After years of doing sessions for clients. Sessions that involved Him.)

He never took it seriously. Gladys wasn’t coming to that yoga class for the purpose of worshipping him. Not of her own free will, anyway.

Just so you know, Blog-Buddies, a wise person doesn’t disrespect any Divine Beings. But especially Shiva.

Gladys could continue on her life journey.

Evolving beautifully on her spiritual path.

A path that has nothing to do with worshiping Shiva. Nor celibacy. Nor any other aspect of renunciate lifestyle.

And here’s the irony. RES Energy READING Skills suggested that the coercive, sneaky yoga teacher was nowhere close to Enlightenment.

But my client Gladys? She’s already on my list of RES clients and students who have moved into Enlightenment. That’s Age of Awakening Enlightenment!