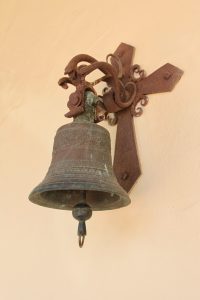 Enlightenment Validation for CHARLES. Let’s chime it in, sweetly, softly.

Enlightenment Validation for CHARLES. Yes, the latest member of our informal RES community has just moved into Enlightenment.

I’d call it “Breaking News,” after the manner of cable TV. But really, nothing at all has been broken. Opposite that!

Enlightenment Validation for CHARLES, Fresh as a Daisy

Minutes ago, we had a phone session. Since, toward the end of the workshop last weekend, I had a hunch. So I asked CHARLES to make an appointment with me.

Didn’t mention the Enlightenment Validation part. Not until we’d done it and… Definitely, beautifully, handsomely, YES! CHARLES has crossed the threshold into Enlightenment.

Why did I choose this particular bell photo? Because CHARLES is one of the RES folks in Enlightenment with a strong Christian background. Moreover, he’s the second one I know of to have clergy in the family.

Why Bother to Use a Procedure for “Enlightenment Validation”?

Maybe some of you are wondering, “Why validate? Can’t you just pick up a vibe?”

Not quite good enough for an Enlightenment Coach. One with standards for rigor. So that “Enlightenment” means something different from:

Preparing for this joyful but serious responsibility… It does help to have skills of energetic literacy. Plus background that has prepared me to become an Enlightenment Coach.

Actually, you can get a sense of that background by reading my new memoir. Even though it only goes up through age 23. Hey, the subtitle reads, “The Start of Spiritual Awakening.” Definitely a clue there. 😉

Because he deserved no less. More than some vague idea.

Also because, thank God, somehow I’ve got those skills. Specific skills for researching a person’s state of consciousness.

As an Enlightenment Coach (as in other respects), I don’t know everything.

However, I do have a procedure for validating Enlightenment.

So that’s what we did. Following that, I made a pretty happy announcement. Afterwards we discussed Enlightenment a bit.

How Come I’m Not Telling You More about CHARLES?

Mostly because he always has the option of writing his own, personal, guest post. When and if he’s ready.

Certainly he gave me permission to write today’s article. And to put him on our various Enlightenment Life Lists. 🙂

I can mention these two relevant facts: