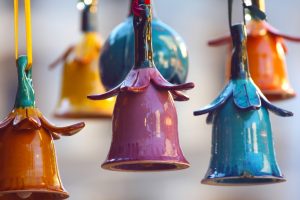 Age of Awakening Enlightenment allows us to live comfortably as the humans we are. And not in the middle, as so many spiritual seekers unwittingly do.

In today’s generous guest post, KATRIINA shares deeply. Giving us an intimate look at her evolving allegiance to life in the world. (Rather than seeking God as somebody who lives apart from the world.)

Before we get to KATRIINA’s beautiful guest post, some clarification.

Either seek Enlightenment as a renunciate. Living in some convent, monastery, or ashram.

Or else seek Enlightenment as a householder. Someone engaged in the world.

Yet many, many spiritual seekers live in the middle. Half and half.

Like sorta going through the motions of marriage and living in a nice house. Sorta doing her best to raise children.

But secretly yearning, with a passion for God that will not stop. And it keeps calling. Whispering. Grabbing.

Guaranteed, that’s a way to be miserable. I ought to know. Since I lived that way for decades. Especially before the Age of Awakening. When so many of us have begun to live that new kind of joy. Age of Awakening Enlightenment.

Today KATRIINA courageously shares today her version of this dual allegiance. How it troubled her, too. Except now it doesn’t.

A renunciate way of life had felt most comfortable for me for as long as I can remember.

There was a time in the fairly recent past…

Where I actually searched for and located the nearest convents.

That was not very rational. Seeing as I have been happily married for over 25 years now. But shows the desperation of where I was. Before I found Rosetree Energy Spirituality (RES.)

Discovering the Value of My Human Life

At first it seemed quite a bit odd that the the whole point of life would be to fully inhabit the human experience.

It was completely contrary to all the theories I had gathered up to that point. In my mind, the point was to strive to be:

All this in order to be more pleasing to God. I took that to the extreme, with the help of my empath gifts.

It was extremely easy to disappear when I was with anyone else. Being with others caused me to feel really crappy. (Due to being an unskilled empath.)

However, according to my beliefs then, however, my interpretation was different. Not anything about doing unskilled empath merge. And, as a result, taking on “Imported STUFF.”

Instead, disliking social contact “meant that I was probably doing well in terms of my spiritual growth.”

My life got radically better after just a few sessions with Rose. And then taking her Empath Empowerment® workshop. Back when she taught that as an in-person workshop. Now she still teaches live workshops. But she doesn’t repeat them. These days she makes her workshop for empaths available through on-demand, online classes.)

I still was not entirely sold on the idea that human life mattered that much.

But my day-to-day life became progressively better the more I embraced the idea.

My biggest “thud” into accepting my human life came this year. Basically I got fed up with trying and failing to attain Enlightenment.

Yes, I still had that as the driving force behind everything. As if saying about my life, “Fine. I’ll play this game of life. But only to achieve Enlightenment.”

I finally took Enlightenment off the table. Inwardly I declared: “If it is offered, I will accept. But seeking Enlightenment shall no longer be THE driving force in my life.”

There was a huge feeling of relief that came with this.

Enlightenment happened less than two months after that.

There were more RES sessions and a Name Alignment in the mix, also. (I’ll use my new name, once legal. It will be easier to spell than “Katriina.”)

All these combined with my driving motivation being to make my (human) life easier.

Finally, during a session with Rose, she facilitated Enlightenment Validation. Hearing that I had moved into Enlightenment made me laugh. As it seemed like the icing on the cake at that point.

What was the big deal for me in that session? The feeling of having my teeth, fully and gleefully, sunken into Life.

Living in Enlightenment, I am noticing  so much more with my human senses.

Certain Words from an Enlightenment Coach

Before Rose started to develop the online workshops available today, she gave one teleseminar. An Enlightenment Basics teleseminar, back in 2015. From that came my favourite quote, ever, about gaining Age of Awakening Enlightenment:

Your spiritual evolution can be understood as… your progressive adjustment to being human.

Being willing more and more to have your body, your life circumstances, your personality.

Not trying to escape it by pursuing Enlightenment