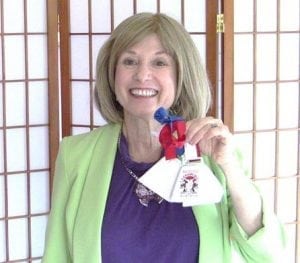 HOLLY’S Enlightenment Announcement can light up your day. Here’s some backstory behind the latest addition to our Enlightenment Life List.

“You’re getting close,” I told her at the beginning of our session on Sunday. Why do I say that sometimes?

As an Enlightenment Coach for some years now, usually I can just tell. My client’s aura is getting really lively, really pure. Somehow the chakra databanks shift in a way that, based on experience, I have come to call “close to Enlightenment.”

Still I never know when, or if, that shift in consciousness will occur.

Occasionally my client will even move into Enlightenment during a session. Exactly what happened last Sunday.

Some Background about Delightful HOLLY.

Towards the end our our session, I asked HOLLY what she felt comfortable sharing here. Glad to note, she was very forthcoming. So here are some juicy details:

But focusing on Enlightenment isn’t necessary to make rapid progress.

Incidentally, I recommended this particular article for an overview of what I mean by “Enlightenment Coaching.”

In the background I’m always helping with this. So you don’t need to request sessions with this specialty in order for me to be helping you to move forward. HOLLY hadn’t. We were just having a regular session.

What Helped Her to Move Into Enlightenment?

As always, right from her orientation to this new Healing Centerpiece, HOLLY’S comprehension was instantaneous. She was eager to go.

And, as always, when I have the privilege of facilitating any Healing Centerpiece, I learned a lot about how my client’s aura was responding, along with paying attention to our human-type conversation.

That’s when, as often happens, co-creation inspired me to add a kind of jigsaw puzzle piece.

Blog-Buddies, you may know what I mean about the mystery of co-creating with the Divine. You may have experienced this even without doing anything RES.

Adding to these skill sets I’ve developed — or been given — an awareness that grows within me sometimes about that particular individual’s path to Enlightenment.

Many times, my role is like helping my client to put together a jigsaw puzzle of how to be that person. And sometimes, as happened with HOLLY on Sunday, it dawned upon me that one of those puzzle pieces was missing.

Not lost forever. More like if you’re putting together a jigsaw puzzle on a coffee table and suddenly it occurs to you, “Look for one of those pieces under the rug.” And then you find it!

And so… After facilitating HOLLY’S Healing Centerpiece, I asked her about…

Clunky name, I know. But this term, from social psychology, is so important that I gladly use that name. Fundamental attribution error involves how you feel about yourself, interpreting what you say and do more charitably than the behavior of others.

I asked HOLLY to describe her understanding of fundamental attribution error. And brilliant woman, she gave a fine description. After all, I’d brought it up in a previous session.

HOLLY’s fine description almost made me giggle. Between the words she chose and her tone of voice, I could tell that she was describing fundamental attribution error in theory but not experience.

Because she pretty much never did it! And that itself was a problem.

Accordingly, I explained about the importance of having a personal ego. That deep down you know you’re a good person. That you can still learn but you also believe you are right. And so you have the right to believe in your side of the story. Every time.

Even if you find a problem, and resolve to do better in the future… even then, you have the right to like yourself and love yourself and know you were always a good person deep down.

By the time we’d finished that discussion, Aha!s were cascading through HOLLY. I could practically hear that final jigsaw puzzle piece “Thunk” into place. And that’s when I knew it was time to use the process of Enlightenment Validation.

HOLLY’S Enlightenment Announcement. She Received It Only After

Going through the RES Procedure for Enlightenment Validation

Curious about that process, Blog-Buddies? You can read about how I validate Enlightenment by clicking here, then scrolling down to the turquoise box.

And now I’ll invite you Blog-Buddies to congratulate HOLLY along with me.

And also the full Enlightenment Life List. (Here’s info about that list itself, including a video, in case you’re curious why I even do such a thing as to create this list.)