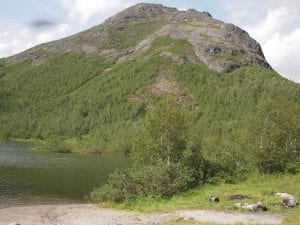 Like previous winners Armistead Maupin and Kyra Petrovskaya! Buffy Sainte-Marie is a memoir writer with an important story to tell. Related to a life of service to others. A life that has involved generosity, creativity, and so much courage.

Blog-Buddy DANA W. nominated her. You can read every golden word at Comments #14-19.

What do you know so far about the power-packed singer and songwriter? Buffy Sainte-Marie is the only First Nations person so far…

Here’s the striking photo we’ll use for this physiognomy portrait. As noted by Zack Ruskin in SF Weekly (a newspaper in San Francisco):

[She] has spent the past 50 years raising awareness for the rights of Native Americans and countless other causes.

Sainte-Marie isn’t a protester who happens to sing her words; her passion is in music.

Background about Face Reading Secrets® will come at the end of today’s article. What if you’re not yet familiar with reading faces for character. Scroll down towards the end of this post right away.  Otherwise, let’s continue.

Many of us have upper lips without a strong shape at the top. But occasionally you’ll find something like Trendsetter Lips: Two triangles. See them, Blog-Buddies?

Especially fascinating, Buffy Sainte-Marie’s version is puffy. First time I’ve encountered that on anyone! See that as well?

This adds gravitas to her related talent and potential challenge.

Communicates on behalf of a group. Yes, leadership for her most important groups — it simply pours out whenever Buffy Sainte-Marie communicates. Whether speaking, writing songs, performing them.

Read about her life and you’ll figure it out!

Feeling more keenly than others the lack of progress? Suffering double, as a result?

Compare the fullness of upper lip with lower lip.

Most faces have a slightly fuller lower lip. So even equal fullness at the upper lip would count as Outspoken Lips. Buffy Sainte-Marie’s upper lip is even fuller. Thus, she’s got the VERY version.

Will incurious people like to hear that strongly expressed truth? Maybe not. Maybe, especially if listeners prefer denial or social blindness.

Nostrils have shapes, Blog-Buddies. That’s the first thing to recognize. As a physiognomist, you start seeing a lot more on faces than some distorted Snapchat version of… Ooh, faces need big eyes. Preferably as big as possible. 😉

Aware of stewardship. Taking seriously the concept of fiscal responsibility. Also responsibility for the riches of the environment.

In “The NEW Power of Face Reading,” I introduce this idea: Certain items of face data serve as Compassion Awakeners.

Awakening compassion why? Because the potential challenge has already happened. It’s not potential, not for that face data.

Although I haven’t yet read Buffy Sainte-Marie’s memo, I know one thing to notice: Financial loss.

Other likely themes: Turning her back on material comforts. Seeking instead a more austere path.

Also, identifying with the terrible poverty of so many First Nations communities.

How far are that person’s eyes plugged into the sockets? With good depth perception, you can see it from the front.

Otherwise find a 3/4 view of that person’s face.

Buffy Sainte-Marie has one of the clearest examples I’ve seen. Such VERY Deep-Set Eyes!

Socially the talent shows. Interacting with others, I’d expect Buffy Sainte-Marie to keep an inner distance. Able to choose carefully which personal truths she’ll reveal. Versus what she’ll conceal.

And not just as a performer, but as a person.

Might other people sometimes sense that distance? An unintended consequence can be this: Making the person seem less relatable than others.

Of course, universal popularity just might be over-rated. Surely it doesn’t have to be anyone’s first priority.

Looking for Cheek Emphasis takes practice. Where do the person’s cheeks stick out most?

Ha, you guessed it, didn’t you, Blog-Buddies? Both of Buffy’s cheeks stick out high up and… Even more significantly… Far out towards the sides of her face.

Courage, exceptional courage. A form of courage that involves honoring one’s highest ideals. And fighting for them long-term.

Gee, does that sound like any folksinger and activist you know?

“Packing your suitcase” in life to have that kind of courage? Might that soul be planning a life that requires it?

A life of greatness. Where duty and sacrifice matter far more than the easy pleasures of celebrity.

Some of the greatest saints on earth don’t live in a monastery, convent, or ashram. Instead they live among us. Doing the jobs that most people don’t want.

And doing them with grace and honor.

I know it’s just a coincidence, Buffy Sainte-Marie’s name. But that Sainte part sure fits.

And a Bit of Face Reading Secrets® Background

First of all, an introductory face reading video.

Want to learn how to read faces on your own? It’s not just some “talent.” You learn, bit by bit. Among all the RES skills, face reading is easiest.

“The NEW Power of Face Reading” will give you a solid foundation. While its unusual way of using illustrations may make you smile.

Finally, this description of RES Face Reading Sessions can preview for you… How much depth comes with a dedicated personal session devoted to your physical face.