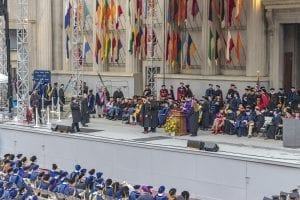 Graduation Celebration for many in the Engineering Dept. at the University of California, Berkeley

Graduation Celebration. This time of year, graduations happen a lot. Blog-Buddies, is your family having one this year? Please comment below. So that all of us in this informal, amazing community can celebrate together with you.

Also, of course, this is also Memorial Day weekend in America. Do any of you have stories to share of that kind of perseverance?

Seems to me, military courage and academic courage have a lot in common. My main family of three — Mitch, me, and The New Ph.D. — we sure got off easy. Since our son did the cushy, academic kind of service to society.

Cushy is, of course, a relative term. This doctorate took him six years straight.

My family’s high point shows in the picture above. One of Matt’s friends, Mehrdad Niknami, took that photo.  (As well as the one below.)

Click on it and you can see Matt and his advisor, Edward Lee. The professor is draping his student with a cloth “hood.” Signifying a new Ph.D. in Computer Science.

By this point in the ceremony, Mitch and I have spent hours viewing graduates on parade. Watching them walk timidly or proudly, stride or scurry, caper or teeter on ridiculously-high heels. First, hundreds of students received diplomas for a Master’s Degree. Finally a smaller group was hooded, receiving the degree called “Doctor of Philosophy.” So many tests they’d taken by now, so many hours of study, and now all they had to do was one final walk across the stage of that huge auditorium.

Contrasting with all that effort, this parent’s only test involved this: No stumbling or tumbling into Technique Time. Some of you Blog-Buddies know what I mean about that.

Fortunately I managed to pass. Since I could play with shallow perception instead of the deeper kind. Plenty of enjoyment remained, reading people deeper by way of body language:

Meanwhile, we participants sat with as much dignity as we could muster, feeling incredibly pampered as we sat on the plush, pink velvet upholstery.

Okay, in reality we got to sit on remarkably hard, pebbly seats in the Greek Theater. Sometimes hoisting up umbrellas. Other times, closing them up and politely letting them drip onto our shoes. But who cared? Certain parents, from time to time, might even have made discreet use of tissues.

I Wonder, Did All the Other Parents at that Commencement Ceremony

Think of their Upcoming Life Reviews?

Well, one of these graduation parents certainly slipped into that zany kind of thinking.

Understandable though, isn’t it? Given that I often help past-life regression clients revisit their previous Life Reviews. Or, more rarely, revisit their Planning Meeting for this lifetime.

No wonder, then, how that big deal ceremony at this great American public university became, for me…  Like an inspiring reminder of what awaits each of us at the end of each human incarnation. As noted in Bigger than All the Night Sky — that’s my “spiritual but not religious” memoir:

Planning Meetings (before a lifetime on earth) might be the greatest art form ever, since what happens is nothing less than this: a soul shapes a new incarnation, then boldly commits. Quite the contrast to Life Reviews, when a soul comes out the other end.

Frankly this returning to heaven to learn about your recent incarnation… it’s like coming out the poop end of life… in contrast to the restaurant-like, lip-smacking deliciousness of a Planning Meeting.

Around here we have this saying, “Planning Meetings for joy. Life Reviews for… compassion.”

And I did ever feel compassion for these graduates. No longer kids but, by now, definitely adults. Like my son. 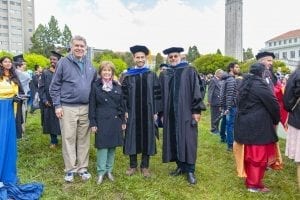 The Dad, the Mom, the Grad, and Professor Lee

Check out four people’s flavors of extreme happiness. (Extreme Happiness being the only extreme sport that really interests me. How about you?)

Every graduation can be a celebration of personal growth. For instance, this commencement for Matt. Sure, earning a Ph.D. takes persistence. But will it be a noble persistence or a jaw-clenching slog? In that context, I’ve got a persistence tale to share with you.

Last fall, Matt came here for a visit. Since he brought a certain muscle power with him, I asked a favor. Would he please dig up a big plant from the garden?

You see, I’d experimented with Zebra Grass. Ornamental, it turned out to be, as advertised. However, the plant was also crazy-big.

Matt’s more a runner than a backyard digger, but he graciously agreed to help. About an hour later, he appeared at the front door. How he was sweating! Smiling and sweating! Most notably, what was the young athlete carrying? The shovel I’d given him.

Managing to wear out a sturdy shovel? Now, that’s a triumph of sorts.

And finding a way to enjoy his life, even while doing a pretty irksome chore. That’s my boy, Matthew Emmanuel Weber!

Now he had a new trophy to add to all the soccer ones from his growing up years.

As if! His parents didn’t carry the thing upstairs, in triumph, to the trophy shelves in his bedroom. Instead the three of us just laughed a whole lot. Then we marched to the backyard to admire the little moat he had dug in the red clay soil, a moat surrounding a huge remaining thicket of Zebra Grass roots.

In triumph, we tossed that particular trophy into the garbage can.

Incidentally, when spring came this year, we hired three burly men. Even they needed quite a while to remove that shrubby, stubborn Zebra Grass.

When you grew up, Blog-Buddies, did you ever hear this saying? “Success is 1% inspiration and 99% perspiration”?

I don’t think that has to be true, do you?

Seems to me, Matt kind of enjoyed doing that ridiculous digging. For much of the time, he probably had a quiet smile on his face. Because he has learned how to enjoy doing things. One of life’s lesser-known skills: Joyful Persistence, we could call it.

That can be a choice. And a way of life shot through with human-bright inspiration.

Ridiculous Ratings + How to Protect Yourself
Self-Realization Seeking, Consciousness Is Key