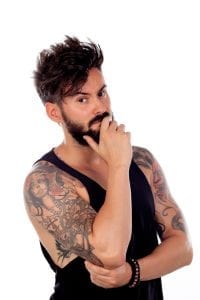 Soul Thrill Aura Research® has been revealing fascinating info. And what it meant for my client, who considered getting inked.

Among other things, you may notice this:

Although this RES Energy RESEARCH session began as just that. Doing aura research about the choice of getting tattoos…

As my client and I discussed what we were finding, soon another one of my roles became relevant.

Now, with no further ado, let’s continue with this fascinating Tattoo Aura Research.

#2B. Getting Inked. Tattoo Aura Research:

Nope. during this results-related part of the session, I decided to substitute….

Why make that switch?

Due to what I discovered toward the end of our Part One article:

Getting a tattoo helps you gain active membership into a big group today in Collective Consciousness. Specifically, folks who are handling their anger by getting a tattoo.

According to what I’m finding in this chakra databank, wow!

Getting inked becomes a way of proving I am stronger than life’s injustices.

So I will fight back. Even if it hurts, I’ll keep on FIGHTING.

And why? Because I hate these people.

Mary Anne, you’re my sample size of one here. What I’ve found may just be for you. What do I suspect, though? Very likely, a variation on this active anger may be a subconscious motivator. Causing many, many people to decide, “I’m getting another tattoo.”

Mary Anne: [Maybe her mouth was wide open by the end of that comment. For sure, no words came out. Not at this point in our session.]

Let’s All Take a Deep Breath Here. And Consider Some Wild Statistics about Getting Tattoos

According to this article:

Rose: Good news here! That chakra databank is definitely large. Seems like, you have immense sexual curiosity and desire.

Perhaps you would love to have an extra lifetime — or a life in a different dimension. Just so you could be all about sex!

But wisely you’re not doing that. And so you have a kind of uneasy truce going on. Sound familiar?

Rose: Gee, here we are in these animal bodies. Because of those bodies, we have sexual drives. Yet living here on Earth School, there’s also much more to us than our physical bodies. Our animal bodies.

For everybody who’s human, choices can help us to balance animal kinds of fun… With living in a way that helps us to grow emotionally and evolve spiritually.

Seems pretty clear to me, that one big motivation for getting tattoos is to appear sexier. I’m so glad you’re letting me include this chakra databank today.

[Note: According to research reported in this article: “While a tattoo may get you more respect from other men, it tends to tell women you’re more fling material than husband material.” Oops!]

Sexual self-esteem for getting a tattoo intended to make you sexier! Sure, I could research that.

Rose: Quite a change shows to this chakra databank as well.

Even though the whole idea of getting at tattoo is about, in your case, increasing sexual self-esteem.

Ready? This chakra databank shrinks down to about 8 inches. And thee quality is kind of… icky.

Because the idea is like, “I’m displaying my sexual toughness”.

Really, here’s come details. What I find when I’m researching this choice for you today:

I’m sexy. And I refuse to be anything but sexy.

Even though the world is cruel. And the world makes things hard. Really horrible for hardworking woman like me.

Getting a tattoo is my way of saying, “Screw you. I’m going to be sexy anyway.”

And Here’s One More Fascinating Nuance.

Straight from Collective Consciousness, No Doubt

Getting this sexy tattoo is my way of saying:

Nobody can stop ME.

You can’t take away MY sexiness.

Does this surprise you?

Mary Anne: No, I can really relate to that with some of the people I have met in my life, it’s very similar.

Similar motivations of “I’m working class.” And “I don’t like the management.”

[Note: MARY ANNE has a professional job. She grew up middle class. Now as an adult, she’s still middle class.]

Blog-Buddies, I’m very interested in learning your reaction to today’s blog post. Please COMMENT away. Include anything that occurs to you. Rather than waiting until you feel you’ve come up with a literary masterpiece. I don’t wait for that. Why would you? ;- )

Thanks again to MARY ANNE. Both for graciously sharing the very personal research we did together. And also for taking all the time involved in doing a transcript.

Personally, I’m so fascinated by what this research showed me about the impact of Collective Consciousness. Influencing everyday decisions. Like, “Is it time for me to get inked?”

But the impact of big, current themes in Collective Consciousness has a subconscious influence. Quite a powerful one.

Seems to me, the more spiritually awake a person is… (Like MARY ANNE, who lives in Enlightenment.) The easier it is to resist the allure of what “everybody is doing.”

Blog-Buddies, you can be reasonably sure that your ability to resist pressures like those in this two-part series… You’ll become stronger simply by any RES Energy HEALING session that removes STUFF from your aura. And then PUTS-IN energies, blessed through Divine co-creation. Energies designed to wake up a stronger expression of your unique and magnificent soul.

And, course, that’s true of anything that helps you to wake up spiritually. And then integrate what you’ve gained in human terms. (Not just RES sessions by a long shot.)

STUFF in our auras turns us into walking cliches. Fortunately we can use our free will to walk away from popular kinds of nonsense.

If not for mythology today in Collective Consciousness, would people ever, ever…. Get a tattoo because it makes you “seem more intelligent”?

Here’s Another Weird Example of

The Subconscious Influence of Popular Ideas in Collective Consciousness

I first noticed, and wrote about a certain weird trend in 2015. If anything, it has grown stronger.

What’s today’s go-to word for any emotion in the “Scared” category? Anxious. Other words might be:

Probably, words like these would be a more accurate label for emotions in that category. But nooooooooooo, people unthinkingly say they feel “anxious.” And why not? It’s all over the media. In movies. You name it.

But there’s a problem. Anxiety is a mental health disorder. And for folks who have been diagnosed with this problem, anti-anxiety medications may be able to help. This is a major category of psychiatric medications. Since true anxiety is a very big deal.

Anxiety isn’t some passing emotion. And so it is a really, really bad way to refer to how you’re feeling. And yet, what have I noticed so far into 2019?

In sessions of RES Energy HEALING, I’ll typically ask the client to name a current emotion.

Fact is, if a client’s aura suggests an extreme problem, such as anxiety…. That’s outside the scope of practice for an RES Practitioner. And I’d have to refer that client to someone who, unlike me, is a mental health practitioner.

Fortunately, You Can Resist the Flow of Fads in Collective Consciousness

Decide for yourself what you’ll call yourself. For instance, how you’ll describe your mood.

Why speak cliches that carry a dismal freight-load? Especially if they’re not even accurate. Grownups are allowed to feel worried. Or apprehensive. Or concerned.

Likewise, maybe don’t take it for granted that the more tattoos you get, the smarter other people will think you are. 😉

Will we live like homo sapiens or homo saps? Up to us.

Getting Tattoos. What Would You Get Energetically?
Being Somebody Wonderful. Summertime Empath Contest