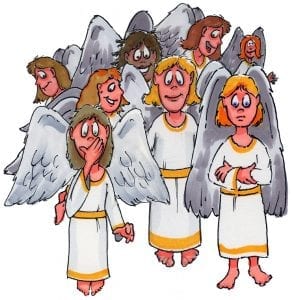 Implicit Bias Hurts. Deep down, most of us feel like angels. Even if we don’t always manage to act like angels.

Implicit Bias Hurts People. But you can do something about it. Simply by speaking up as best you can, as I’ll describe in today’s article.

And gee, why would I discuss this topic? Can you guess? Yeah, because I’ve got some fresh-and-stinging Teaching Tales to share.

Probably you know from personal experience. Being on the receiving end of implicit bias… hurts.

Consequently, I’d like to open up a controversial topic: Have you dished out prejudice, due to implicit bias? And have you had to take it?

Specifically, what can you do when somebody reveals a prejudice against your kind?

First of All, What Is Implicit Bias?

Do you already know the term, Blog-Buddies? I’m guessing yes. Folks who care about deeper experience of our shared humanity… we tend to notice such things.

Simply put, implicit bias means having a subconscious prejudice against one or more groups of people. Basically, this causes “perfectly nice” people to act in ways that, on the receiving end, reads as prejudice. Plain as day!

Even though the perpetrators would never, ever call themselves “prejudiced.”

So Ironic, Right? Since Many Good People Would Say, “Not Guilty. Never Guilty.”

Sadly, implicit bias doesn’t just cause us to subconsciously erase the humanity in another person.  Unknowingly people can wind up expressing that prejudice in ways small and large. Expressing an “us and them” mentality long before it gets to the grotesque stage described in the front page story from today’s Washington Post:

Seems to me, we can draw a straight line between today’s hate graffiti in the news and my two Teaching Tales. Why blog about them? In order to turn this hurtful topic into a free will issue.

Bringing up practical choices. Also, honestly facing the likely implications. Depending on whether or not we take action.

Here’s my question to you, Blog-Buddies? What can we do on the receiving end of everyday incidents that reveal prejudice, implicit bias, etc.?

Context for My Non-Newsworthy Tales about How Implicit Bias Hurts

Over the last couple of weeks, my husband and I went on a trip to Ireland. It was a group tour, and delightful.

Equally charming was our tour guide, Dick Daly. Deftly, he pulled our group together. Got all of us on our bus. Every time. Making sure that some timeless tourists were never left behind. All the while, treating everybody with kindness and respect.

And, mostly, it was an equally pleasant crowd. Never did I hear an argument in group situations, for instance. In fact, the only argument I witnessed at all was a one-on-one. An argument that, like it or not, was begun by me.

The 3 Specialties Technique, Introduced Here. In This Very Blog Post!

Blog-Buddies, how do you give a quick description of people? By their looks? Their color? Their ethnicity? Or their work? Their what????

To bring alive the incidents that follow, I’ll share my favorite way to “peg” people. Without having to stereotype them.

Probably you know that I don’t recommend doing aura reading in everyday life. (Better to live like a human, using bland Stage 1 Energetic Literacy. Emphasizing human reality.) However, here’s a Deeper Perception way, right on the surface of what folks say and do, to give you a sense of what different people are like.

As you may know from this book jammed with easy ways to co-create with God, we humans have three main areas of specialty:

In the tales that follow, I might describe somebody as specializing in one, two, or all three. (Funnily enough, in personal sessions with me, you may have noticed. Sometimes I might help you to use more love. Or light. Or power. Because that’s the Energy Spirituality perspective on personal growth.)

What else, as we get started in these two Teaching Tales? Just my usual disclaimer: If inaccuracies creep in, I apologize. All I can do is report to the best of my ability.

Now, let me introduce you to Cindy. She’s a pleasant woman, enjoying retirement and family. Friends might describe her as “All heart.” I’d describe her as specializing beautifully in love, just love.

In college, Cindy majored in English lit. Early in our trip, we discovered that we were the only two in our group who’d done weird things like read “Ulysses.” Enthusiastic fans of Yeats and Joyce, both of us, guilty as charged!

Imagine my surprise, halfway through Day 3 of our trip, to overhear this comment from Cindy. (At the time, we were clambering into our tour bus. And, as usual, Cindy talked in a fairly loud voice.)

“It’s the funniest thing. I can’t figure out how they look alike, exactly. I just know that they do.”

From my perspective, the answer was clear:

In short, exactly how did we look so very alike? Easy. Because we’re Jewish.

Yes, our tour included exactly two Jewish women. (Far as I know.) Harriet and me. And I’d describe us both as having a strong Jewish vibe.

True, slightly related, story: On one of my tours, a woman took me aside after one of my lectures for the Inner Potential Centre. “Would you please act less Jewish? That way you’ll be more successful here in England.”

Teaching Tale Part: How Did I Handle This?

Note: Out of all the words at my blog, this is the first time when I’ll use the term “anti-Semitic.”

Only, in this case, how could I not draw that conclusion? The question was, what was I going to do about Cindy’s inadvertently hurtful words?

Mostly, for the next couple of days I enjoyed my trip, but in the background her word bothered me. Then I found an opportunity to pull Cindy aside, prefacing my comments by saying: “I like you, Cindy. I like you a lot.”

Then I repeated what I’d heard her say. Plus, my conclusion: “All you saw was that both Harriet and I are Jewish. I want you to know, that hurt my feelings a lot.”

Cindy spoke — and looked – totally cluelessly. That’s when I yelled somewhat. I told her, that comment hurt my feelings, whether she meant it as anti-Semitic or not. “Ever hear of implicit bias? You might want to look it up.”

Somehow Cindy managed to apologize. Although her face still looked totally blank — even victimey. Poor Cindy! Tactfully she offered a non-apology. Like, “I’m sorry that you didn’t like what I said. Although I didn’t say anything wrong.”

Who knows if Cindy will ever think about this a little bit more?

Anyway, all I know for sure is the social consequence. Cindy studiously avoided making eye contact, or standing anywhere near me, for last four days of our tour. Also, suddenly, her friend Hilary stopped talking to me, too.

It was a shame. Personally, I was ready to move on and make typical tour-trip small talk. Having spoken up, I could live with myself. And I certainly could live with Cindy.

I still liked her. And Hilary.

On the last night, I marched over to Cindy and found a low-key way to speak to her. And she small-talked me right back.

Btw, did I ever tell Harriet that Cindy decided we two Jewish women looked alike? Nope. Why stir up trouble?

I did, however, tell this story to my husband Mitch. Waiting until we were hanging out at the airport, getting ready to fly back home. And that’s when Mitch told me about…

As noted previously, Cindy had a friend on the trip, Hilary.

Wonderful Hilary, specializing in love, light, and power; brilliant, talented, adventurous, and kind; imho a total dazzler. For those first five days of the trip, we talked a lot.

Only now, at the airport, Mitch told me this about Hilary. (My Hilary! One of my standout favorites of the whole trip!)

“I’m not that surprised about Cindy. Rose, these things happen. Look, her friend Hilary called me “Mickey” for the entire trip. After a couple of times, I stopped trying to correct her.

And who was Mickey? The other Jewish guy on our tour, of course. Possibly, a third man on the trip was Jewish, but he didn’t blast out a strong Jewish vibe. (Many of us don’t. One reason why so many Jewish entertainers seemed “perfectly normal.“)

Anyway, I’ll spare you the rather extensive list of all the ways that Mickey and Mitch are different. Except for summarizing what showed using the 3 Specialties Technique:

Oh yes, did I mention? Throughout most of the 9-day trip, both Mitch and Mickey… and every single person on the tour… was wearing a great big name tag.

Hey, I guess to some people all Jews seem identical. And no mere name tag is ever going to change that.

Teaching Tale Part: How Did He Handle This?

See, I’ve known Mitch since he was 22 and I was 29. Amazingly, it’s now 52 years later. In many ways we’ve grown and changed. While in some other equally good ways, we haven’t.

One example of what hasn’t changed? During conflicts, Mitch quickly assesses who is ready to listen. What if his change-dar decrees “Nope”? Then Mitch won’t waste his breath.

While me? Look, you know me, Blog-Buddies. I’m a teacher. A spiritual teacher, in fact. What better use for my breath can there be… than reaching out for a little bit of honest conversation?

And so, whenever I feel there is any chance of growing closer together (rather than increasingly distant), I’ll leap in.

Leap in all the way: Hope blazing. Power at the ready. Shining my light. Eager for learning all around!

Hilary didn’t get that particular chance to grow.

Although my heart tells me that this courageous woman would have relished the chance. Even welcomed it.

I think she was big enough to have respected Mitch more (not less) for raising the possibility of implicit bias.

Where Do We Go from Here, Problem Solving around Implicit Bias?

Next post? That’s already queued up. We’ll wrap up our longest-ever series of blog posts. Most recent of the set gives you thought-provoking quiz answers about Holistic Healing, Energy Healing.

Following that, at some point, I’d like to devote another article to implicit bias. But from this perspective: How can we move beyond doing it to others?

Could be, I might not be the only Blog-Buddy here who’s had some pretty cringe-worthy moments. Blanking out through that subconscious bias. Consequently, hurting people’s feelings. If you know what I’m talking about, I’ll bet that you also would really, really like to prevent ever doing that again.

Here at this post, I welcome your comments about this new topic. Have people hurt your feelings because of their subconscious prejudice?

Hey, is it possible that “implicit bias” sounds so clean and academic… that you’ve never connected it to stinky, gritty, gunky acts of prejudice? (Or, ultimately, to hate speech, as in the two newspaper articles I linked to earlier in this article!)

When people mixed you up with others “just like you,” what then? Did you problem solve by acting more like Mitch or like me? Or by doing something entirely different?

And do you agree with me? That it’s important for to call people out in such situations?

Look, we’re living in the Age of Awakening. (Even if everybody doesn’t know that big-deal fact yet.) Could be, we’re just too awake inwardly now… Too awake to perpetuate traditional blank-spots in acknowledging another person’s humanity.