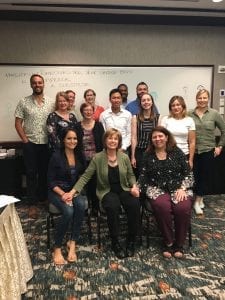 Good People. Celebrating them. Also, why can good souls sometimes do terrible things?

Are you one? Of course. Who else would voluntarily read an article about living a a good person?

If Your Country’s Now Politically Divided,

All the More Reason to Think about Human Decency

Because it matters. And some of you may be wresting with a certain spiritual dilemma.

In this article, I’ll refer to this combo as the Good People Paradox. Essentially, if people are good how come so many of them are doing terrible things?

Have you been following the Trump Impeachment Inquiry? Then you’re probably aware of warnings by Fiona Hill and other fact witnesses. According to this former member of Trump’s National Security Council:

“Some of you on this committee appear to believe that Russia and its security services did not conduct a campaign against our country and that perhaps, somehow, for some reason, Ukraine did,” Hill said. “This is a fictional narrative that is being perpetrated and propagated by the Russian security services themselves…

“In the course of this investigation, I would ask that you please not promote politically derivative falsehoods that so clearly advance Russian interests.”

And yet many Republican senators did just that. Throughout the two weeks of televised testimony.

Even worse, news has broken that, in advance of the hearings, that WHAT? U.S. Senators were briefed on the Russian campaign to blame Ukraine for 2016 election meddling. Evidently these senators knew the truth. Knew the stakes. Yet they chose to support Putin’s program.

Like many, I’m waiting for a moment of honor in the U.S. Senate. A historic moment similar to the one that brought down Senator Joe McCarthy. Ever hear of this question from U.S. Army attorney Joseph Welch? “Have you no sense of decency, sir?”

Certainly, this is a good day to think about goodness.

My Perspective as the Founder of Energy Spirituality

Because of the work I do, I might be able to help you to sort through the Good People Paradox.

Incidentally, you might be inspired by previous article of this two-part series. The Dharma article.

That can give you perspective on what YOU can do. And also on why people you know, and politicians who represent millions, can fall into Tribal Loyalty.

One of my roles, helping clients in personal sessions, is to serve as an Enlightenment Coach.

So I know that, for many of you reading today’s article, what’s happening in many countries now…

Even though you Blog-Buddies tend to be very sophisticated spiritually, this article may tell you some things you didn’t know before.

In advance, may I request? If any ideas in this blog post prove surprising… please COMMENT below.

By sharing the nuances of your reaction, you’ll bring these ideas to life. And you’ll also help me to lodge them more strongly in Collective Consciousness.

Did you know there are two different ways of understanding your soul? (Or anyone else’s.)

First, you’re an eternal soul. Consider the words of Coletta Long, Ph.D. “You’ll always be in some body somewhere.”

Second, what’s true of anybody living on earth now as a human being. It’s an incarnation. Or, to but it technically, it’s a unique expression of that eternal soul.

Although our immortal souls are beautiful, when we live on earth… Funky things can happen.

Coletta Long was my best teacher for hypnotism and past-life regression. By a country mile!

The photo at the top of this post shows a class photo. From a workshop where I taught students how to use the method which I wound up developing. Building upon Coletta’s teaching as best I could: Soul Energy Awakening Hypnosis®.

Having facilitated numerous sessions of past-life regression, I know that many clients have had powerful results.

Equally clear to me? How much every one of these sessions has taught me.

Basically, sometimes a beautiful soul chooses to have a perpetrator lifetime. (Acknowledging here this one of Coletta’s brilliant contributions to past-life regressions. She gets enduring credit for this important discovery.)

A beautiful soul can choose to have this kind of ugly lifetime, a perpetrator lifetime. Sometimes an evolving soul aims to learn why people do bad things. Horrible crimes. Whether or not they get caught at the time.

And there’s only one way to learn what that really feels like. You make a Life Contract to set up a perpetrator lifetime. Then you go through with it.

Later, if that soul chooses to have further human incarnations on earth — oh yes! Sooner or later, that soul will have to pay back the karma.

So it could be that many of the people you and I observe doing wicked things… Can’t help themselves. And won’t be able to change for the rest of this incarnation. Because  those incarnated souls chose a perpetrator lifetime. And these are not (as I understand things) negotiable.

What IS Negotiable, Though?

Many people make mistakes. Bad choices. Their actions may seem identical to the actions of somebody having a perpetrator lifetime.

Only it’s very clear from having taken many past-life regression clients through Life Reviews. Quite often a beautiful lifetime is planned. And the soul blows it. Making wrong choices.

Maybe this can bring you some comfort, if you know folks who might fall into this category:

Even a “failed experiment” of a lifetime leads to soul-level learning.

Consciousness Lifestyle is a much newer term than Dharma. Yet, for us living now, it’s extremely important.

Blog-Buddy KYLIE just published a relevant comment in Part 1 of this two-part series. In her Comment #8 she wrote:

Dharma has always seemed important to me, but at this time in history when so many people are in spiritual addiction or shutdown, it is more important than ever.

Understandably, you may never have heard about consciousness lifestyle. Especially if you haven’t yet learned much about what happened on 12/21/12: The Shift into the Age of Awakening.

Yes, let’s get practical about one of the consciousness lifestyles today, spiritual shutdown.

What happens when people live in spiritual shutdown? An estimated 45% of Americans, btw. Gone is their capacity to think. Act. Or live. As good people. Tribal loyalty becomes the only dharma. Or staying in power.

Technically, people can come back from spiritual shutdown. I’m hoping for that. Haven’t witnessed a single instance yet. But maybe there will be a massive waking up from that shutdown. (I do see it as an adjustment problem. Mostly one of the ways that people can have trouble adjusting to our New Vibrational Freedom. Which you can read about — and learn to manage — from “The New Strong.”

Also, Some Folks Have this Different Consciousness Lifestyle Problem

Because what happens when people live in extreme spiritual addiction? (So far, an estimated 5% of Americans.)

Summing up, they’ve lost their humanity altogether. Not only their human decency.

Far as I understand, nobody comes back from this consciousness lifestyle. And yes, I’ve done my share of grieving over people in this category.

At least it doesn’t just happen to people. Rather, it’s the culmination of a series of bad choices.

Do these folks necessarily feel bad about their consciousness lifestyle? Probably not. In fact they may feel high. With an astral kind of buzz. (Which they may think is Divine but definitely is not. People’s auras show a clear difference, if you’ve got everyday, dependable Stage 3 Energetic Literacy. Plus practice at discerning consciousness lifestyles.)

And what consoles me most? Something I’ve learned from facilitating sessions of past-life regression:

When this incarnation ends, the soul will get cleaned up on the other side. Cleaned up from that incarnation.

A Life Review will follow. And then that soul regains clarity and goes to live in a heaven.

No doubt this kind of “failed experiment” for an incarnation will lead to learning. Valuable learning for that eternal soul.

As always, you’re invited to COMMENT away. Go for it! Don’t overthink your comments. Because this is an interactive, educational blog. You’re not writing the Gettysburg Address!

How about an unusual idea as well. Many of you Blog-Buddies have read this blog post about the Trump Impeachment Inquiry. So you know you’re invited to COMMENT there. Voicing your interests to help me choose who will star in each of our Friday Aura Readings until this impeachment process is done.

But so far, only one of you (LINDSEY 🙂 ) has nominated any of these people at a separate blog post. At our Spiritual Enlightenment Life List, I research the consciousness lifestyle of all nominees. Is anything stopping you from nominating every single one of the major players?

In this article… Like the previous one… I’ve been sharing what brings me comfort.

Also, one great thing about living in today’s “interesting times” is how the concept of dharma can seem so compelling. Could there be a better time to insist upon being a good person? Maybe never.