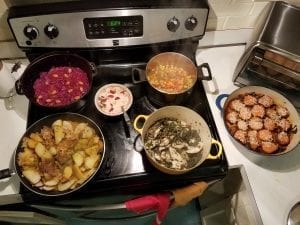 Age of Awakening’s First Decade. Seems to me, it’s like the Christmas dinner I made for my family this year. Spicy. But not fancy. Very HUMAN.

Age of Awakening’s First Decade. As we begin the second, let’s learn from what happened during the first.

Such a historic decade it has been, unique in human history! Even if most people alive didn’t know that what was happening… Was, indeed, happening.

Humanity’s First Decade in the Age of Awakening?

Because, as a matter of fact, it was a partial decade, right?

Since the Age of Faith ended on December 21, 2012. And then it began. What some folks like to call the “Aquarian New Age.” But I prefer, for many reasons, to call the Age of Awakening. (What if you’re curious about why? Simply COMMENT below and ask.)

Not 2010. Therefore, humanity has had only seven years. Thus far, only seven topsy-turvy years.

Don’t Be Fooled by the Media Blackout

Something Really, Really Important Happened with the Shift into the Age of Awakening

Despite our 24/7 news cycle, only one media interview has appeared so far. At least to the best of my knowledge. Read it here: This Age of Awakening Quiz might surprise you. Maybe you’d like to take it before you go farther.

Maybe needless to say, here I won’t be duplicating that Quiz. But, rather, deepening that knowledge. By giving you inside information from the Founder of Energy Spirituality. And did I ever have a front row seat!

Learn about this upgrade for humanity from this first-ever article on Your Soul Expression Support.

This Divine-level Support, located right in your aura ever since 12/21/12. It’s one of the ways to evolve your sense of purpose. In order to live like God’s Grownup in the Age of Awakening.

Rather than begging God — or psychics — to reveal your Life Purpose. (So typical of the Age of Faith!)

Or otherwise aiming for surrender along your spiritual path. (Again, totally typical of the Age of Faith!)

By now, you’re already wise to this. At least, if you’ve been reading this blog. Otherwise?

Which other Enlightenment Coaches have published anything about this new kind of Spiritual Enlightenment? Find out the answer by clicking on this Google search.

How nuts is that? Yet how many other Enlightenment Teachers have Stage 3 Energetic Literacy? Or other requisite skills for Validating Enlightenment?

Over at this Energy Spirituality blog, who was the very first person for whom I validated Enlightenment? Sri Julie Blake Edison. 🙂

A while later, I moved onto the list of Energy Spirituality clients and students in Enlightenment.

Since then, that list has been growing. In fact, so many Energy Spirituality folks moved onto that list that I published this: The first-ever article on Enlightenment Etiquette. (Another first in the Age of Awakening, far as I know.)

What’s the biggest advantage of Age of Awakening Enlightenment over the Traditional Kind? Continuing to grow humanly, that’s what.

Of course, you might expect every Enlightenment Teacher to keep track of this.

Only then you’d be wrong. Sigh!

This first decade in the Age of Awakening, who else has a list of people in spiritual Enlightenment? How you answer this question — weirdly — will depend on your standards.

Sure, that’s the most popular list at my blog! And at the top of that article you’ll find many links to support my approach to Enlightenment Coaching.

On the other hand, check out this DISCERNMENT JAMBOREE about Enlightenment Validation. By all means, contribute to our ongoing exploration of WHO posts other Enlightenment Lists. HOW they choose. IF you find the methods to be credible.

You might chuckle over my first name for this new kind of Enlightenment. Back then, I called it “Householder Enlightenment.” Otherwise, though, the information is sound. And those of you who have the hobby of “Enlightenment Historian” might find this YouTube video worth watching.

Making the Most of our New Vibrational Freedom

After the Shift into this new era on earth, did God give us humans a rule book? Nope.

Because that’s up to us. So very Age of Awakening.

Thus far, we have no scriptures handed down by the Divine. Like the Old Testament or New Testament, the Koran, the Upanishads.

Personally, I don’t think we ever will, either. Because humans are no longer called to be God’s obedient, begging children. In this Age of Awakening, we’re charged to become God’s grownups. And ordinary people can learn how to co-create with God.

This ordinary person, for example. Which is why I took a few years to write and publish The New Strong. Also, I’ve begun a New Strong Collection of Online Workshops. (Starting with this series of lessons. Your gift, as a Free Intro. Next comes New Strong 101.)

One Highlight Is This:

Powerful Changes to the Rules for Being a Good Person.

How can you get strong in a new way? One motivator is self-protection.

Like it or not, once the psychic barrier left earth on 12/21/12, oops? That didn’t just allow human beings to enjoy a New Vibrational Freedom. (Regarding how we position our consciousness.)

Lacking effective skills that work in the Age of Awakening, no wonder, many resources fail to protect folks. One of my favorite example is this audio interview. Where I researched a faithful follower of a “healing meditation” that left her worse off. Not better.

By now, each human adult has a consciousness lifestyle. (Note: The following statistics do not apply to autistic persons. Or folks who are developmentally disabled. etc. These statistics apply only to people with normal mental health. Others are playing different, beautiful roles on earth.)

Draw your own conclusions, Blog-Buddies.

Most important to keep in mind, you can definitely be living The New Strong.

But it won’t happen automatically, like graciously allowing your heart to beat. Will you make the effort or not?

#7. Age of Awakening Challenge in Our First Decade. Mind the Gap

Such a knowledge gap exists in our world, after this first decade.

Just one example about Mind-Body-Spirit ideas. The promises began during the New Age Years. (Namely from 1980 until the Shift on 12/21/12.) By now these ideas are way more prevalent.

Even though, according to my research, most of the big-and-shiny mbs ideas from these transitional years? Obsolete.

Which is why some psychics have begun turning spiritual. Without fanfare. Quietly choosing to grow, rather than to keep pursuing a dead end. (And one that makes them increasingly susceptible to extreme spiritual addiction.)

For you as a knowledge consumer in the Age of Awakening, please question what “everybody thinks.” Or believes.

And continue to use this website and blog as a resource to help you. As together this informal community continues to bring more truth into this world.